BlackBerry Storm gets a freshly leaked upgrade to OS 5.0 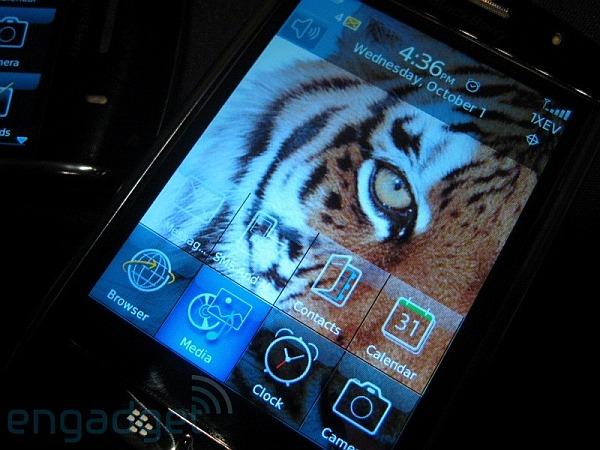 RIM's a little late to the touchscreen party, but comes bearing goodies. The BlackBerry Storm is a beast of a phone in more ways than one. Fronted by a meaty, high-resolution touchscreen with an innovative clicking mechanism, the phone is easily the prettiest by RIM to date. There's a brushed metal back, a beautiful new OS interface, and enough radios to give your grandkids cancer (EV-DO Rev. A, quad-band GSM, Europe-friendly HSPA, GPS, Bluetooth 2.0 with A2DP, though sadly no WiFi). But the real test of a phone is usability, not flash. Check out our impressions after the break.

RIM's going back to its roots here, and once again reminding us why corporate users tend to holster their phones instead of pocket them -- the Storm is a large one. It's not that you can't slide it into a jeans pocket (it's 0.55-inches thick), and in fact, there's no particular dimension that the Storm exaggerates beyond reason in comparison to, say, an iPhone, but folks who felt that Apple was already pushing boundaries there won't take kindly to this beefy phone. The traditional BlackBerry weight advantage is gone as well -- the Storm's large glassy touchscreen and related clicking mechanism, in addition to a very solid build means the weight certainly matches the size.

So, about that touchscreen. We were skeptical, since we've seen so many touchscreen phones done badly, but the Storm is a real charmer. First off, you have to understand the approach RIM took, which was to interpret the existing navigation method (scroll ball) into a touchscreen environment without pissing off existing users who were just getting over their jog dials. That method boils down to two categories: navigation and execution. As in, with previous BlackBerrys you scroll the wheel to select the email / link / application, and then click the scroll wheel to open / click / launch the object. Now you flick the screen to scroll, tap to select, and click to activate. That means when you tap the screen to select a soft key or an email or an application on the Storm, the object is highlighted, but nothing actually happens. You have to click down to execute, and we really mean click. The entire screen is floating on a clicking mechanism, and clicks down evenly, which provides just the right amount of resistance and tactile feedback, while still allowing for rapid operations like typing. The capacitive touch on top is perfectly sensitive and accurate. We'll get more into how well this works for actual usage (hint: pretty darn well) in the software section.

The 3.25-inch screen itself is bright, colorful and high-resolution (480 x 360). Video playback is sharp and smooth, and the extra pixels on the large screen means eye fatigue won't be much of an issue. Unfortunately, as far we can tell there's no hardware video acceleration, which shouldn't be a problem for correctly-compressed video, but there aren't any Apple or Nokia-style swooping transitions in, we don't have high hopes for gaming, and stuff like browsing through photos and and panning around web pages is fairly choppy. The lack of hardware acceleration could also cut down on battery life, which RIM is pegging at 15 days of standby and 5.5 hours of talk, but hasn't fleshed out with media playback figures.

In addition to the touchscreen, there's a full complement of standard buttons for getting things done: rocker switch and camera button on one side of the device; another function button on the other side; call, end, back and BlackBerry buttons on the face; invisible mute and lock buttons up top.

There's an internal accelerometer, and the screen (speedily) rotates accordingly, even allowing full rotation for left-handed use. There's a micro-USB plug on one side, and a 3.5mm jack on the top right side of the handset. Unfortunately, that sideways jack pretty much means you'll need to go A2DP or rock the phone holster-style to listen to music on the go, it's going to be quite uncomfortable in your pocket with a headphone plug sticking out the side. There's a very, very loud built-in speaker for pushing out your tunes old school, and an included dock for enjoying movies in such a fashion -- when docked the phone also doubles as an alarm clock, and is plenty loud enough to pull it off.

Like we said before, RIM didn't want to reinvent the wheel here, and didn't. In fact, almost the entire interface -- besides the recent aesthetic overhaul enjoyed by both the Bold and the Storm, which brought much needed perks like readable fonts and a modicum of glamor -- is standard BlackBerry. That means the standard, business-friendly strengths of RIM remain intact, while some of the long-standing interface annoyances (like incessant scrolling) can be overcome with a simple tap or click of the touchscreen.

But the true test of any touch-based phone is typing, and we won't hold any punches here: we're in love. In fact, we like it enough to pit it against regular button-based keyboards, since it easily leaves traditional touchscreen typing (even that hokey haptics stuff, Nokia, LG) in the dust. In landscape mode, the QWERTY keyboard is simply gargantuan, which means the keys are hard to miss. Tap a key and it glows, letting you know you're on the right one, click the "key" (the entire screen, really, but it feels like you're just clicking that one key) and you type the letter. We're guessing we could type out a few words without looking in a pinch, and for people just starting out on a mini-QWERTY keyboard, they're going to have a much easier time finding the letters than on those relatively teensy QWERTY keyboards on existing HTC, Palm and RIM phones. We're even bigger fans of typing in SureType mode (two letters per virtual key), with the phone in portrait. The buttons are the largest of any SureType keyboard out there, you can type with one hand, and the touchability of the screen means it's easy to select the right word when there are multiple options. Both options blow away the touchscreen alternatives thanks to the screen click, though SureType is an acquired taste.

In standard RIM fashion, one-handed navigation is a priority and totally doable, but now there's actually room for two hands, which could speed all sorts of actions -- click the app switcher button with one thumb, tap your desired app with the other, not mind-blowing, but helpful. There are other perks brought on by touch that will take a bit of exploration to discover. For instance, if you tap and hold the screen (without clicking) on an email address or an email subject for a couple seconds, the phone will search for related emails. Multitouch makes a reluctant appearance in the form of two-fingered selection. Hold one finger above and another finger below a block of text to select it, then tap and drag to fine-tune the selection. Unfortunately, stuff like two-fingered zooming and rotation isn't happening here, but RIM promises to work on other helpful uses for touching -- it feels a tad underutilized in its present form.

Wait, wait, rewind. Did we just say text selection? Yes, RIM (and other sane, mature smartphone OSes) has been doing text selection and copy / paste for a good long while, and didn't think the Storm was any time to stop. You can select, copy and paste anything, anywhere, including random blocks of text from the browser (just switch from "pan" to "cursor" mode).

Speaking of the browser, RIM has made great strides in the past year or so, but its homebrewed Java-based app still doesn't quite match the Nokia / Apple / Google-favored WebKit in terms of rendering speed and accuracy. We also didn't see the sort of smooth and effortless scrolling the iPhone provides, that no other touch phone has managed to replicate so far.

RIM's core apps are obviously just as solid as ever when it comes to email, calendaring and contacts, and are increasingly being integrated with the browser and outside apps like Facebook. What's still lacking is a truly powerful and cohesive media player -- it still seems tacked-on, though the search feature in the music app is a nice touch. RIM's clearly working on this, but there's more to be done. At the time this post goes live we're still not sure if those leaked App Center screenshots are legit, but it'd certainly be a nice shot at Apple and Google, and a chance to bring RIM's existing developer community to the forefront.

Carrier (Verizon) and budget (unknown) constraints aside, what it's probably going to boil down to is whether or not the BlackBerry OS is your style. RIM hasn't done an overhaul to make touchscreen viable, instead banking on its navigation / execution paradigm to make the transition to touch -- which for the most part it does brilliantly. RIM hasn't in any way made the phone unattractive to its traditional corporate loyalists, and might just manage to snag other users looking for a flashy phone with decent email, but when it comes to browsing, media playback and other forms of consumer-friendliness, RIM still has a ways to go.

In this article: 9530, blackberry, blackberry storm, blackberry storm 9500, BlackberryStorm, BlackberryStorm9500, features, hands-on, rim, storm, storm 9530, Storm9530, verizon, vodafone
All products recommended by Engadget are selected by our editorial team, independent of our parent company. Some of our stories include affiliate links. If you buy something through one of these links, we may earn an affiliate commission.
Share
Tweet
Share