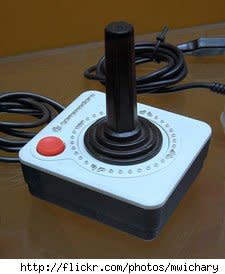 Reader Aaron Stacey wrote to tell us about a simple new script he's developed that allows him to play WoW more fluidly, despite having little fine dexterity control in his right hand. Since a spinal cord injury, he is only able to grasp and release his hand. Prior to developing this script, Aaron used to play only with his left hand using "an abundance of key binds and keyboard/mouse switching." He was restricted to caster classes because of the difficulty in moving and attacking at the same time.

Inspired by our Wii remote post and our treadmill post, Aaron came up with an ingenious idea that he hopes will help others with similar disabilities. The key is GlovePie, a piece of Windows freeware (donations welcome) originally written for virtual reality gloves, which allows you to play any game using any type of controller you like. GlovePie's website lists controllers like joysticks, gamepads, mice, keyboards, and Wiimotes, among a host of other hardware.

Find out how to do it yourself after the break.


The GlovePie website offers a bit of instruction in how to write scripts, but for the most part Aaron was on his own. He's hoping that developers in the WoW community can take the ball and run with it, making more complex and functional scripts that everyone can benefit from. Scripts for GlovePie can be written to control all the buttons on any given device and even lets you program gestures and speech. As such, it promises to make WoW and much more accessible to people with handicaps. Aaron was so happy with his joystick modifications that he's even been flexing his melee muscles by beta testing a Death Knight.

Here's the script that Aaron uses for his controller. Just copy and paste the green lines below (don't copy the lines labeled "Script") and save it as a *.PIE file. If you know of more complex GlovePie scripts or scripts for other devices, let us know where to find them in the comments section.

Updated: the previously posted script was incomplete. The corrected script is below.

In this article: accessibility, carl-kenner, disabled, game-accessibility, gamepad, gestures, glove-pie, glovepie, joystick, mouse-gestures, physically-handicapped, tweet-this, voice, voice-commands, wiimote, wiimote hack, WiimoteHack
All products recommended by Engadget are selected by our editorial team, independent of our parent company. Some of our stories include affiliate links. If you buy something through one of these links, we may earn an affiliate commission.
Share
Tweet
Share