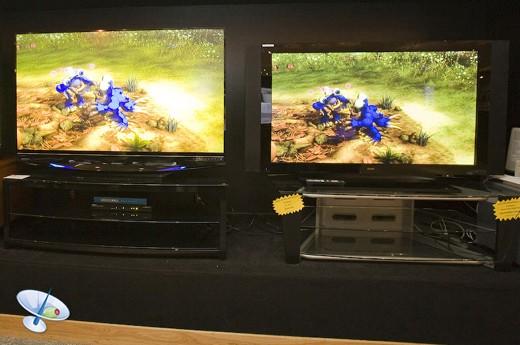 We'll be frank -- Mitsubishi's 65-inch LaserVue L65-A90 was one of the most stunning things we saw at CEDIA 2008, so we're not surprised to hear that one of the very first production units impressed the lucky folks over at TheTechLounge. Said individuals were able to take a first-hand look at Mitsu's forthcoming beast, and while the situation was obviously optimal for viewing, they couldn't help but praise the TV. The demonstration included two LaserVue sets, one of which was displaying 3D 1080p content from an HTPC and another that was setup beside LCDs for comparison. When staring at the aforesaid comparison setup, critics noted that "color performance on the LaserVue was noticeably more impressive." There's lots more reaction and images where this came from, so delve on into the read if this here set is on your wish list.
In this article: hd, impressions, in the wild, InTheWild, L65-A90, laser tv, LaserTv, LaserVue, mitsubishi, pics, pictures
All products recommended by Engadget are selected by our editorial team, independent of our parent company. Some of our stories include affiliate links. If you buy something through one of these links, we may earn an affiliate commission.
Share
Tweet
Share