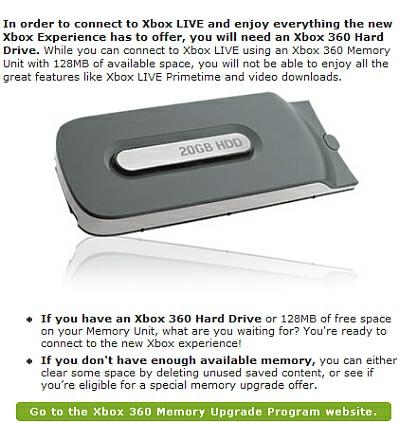 Microsoft's New Xbox Experience has been pored over and dated, but now that Major Nelson has revealed it requires "at least" 128MB storage available to work, where does that leave suckers Core and Arcade SKU Xbox 360 owners? Enter the Xbox 360 Memory Upgrade Program, doling out free 512MB MU's or $20 20GB HDDs to Core owners, and a $30 20GB HDD + 3 months of Xbox Live package to Arcade owners looking to upgrade. November 19, Xbox Live becomes a storage-only affair (that goes for Netflix streams too, requiring 8MB of free space), so grab your serial number and console ID from the current Xbox 360 Dashboard and hit the registration website. Impressive customer service gesture to extend functionality for all, or more evidence of a short sighted and flawed dual-SKU launch plan that's cost gamers and developers alike? All we know for sure is we've probably figured out where the profits from those $149 120GB HDDs are going.

[Via NeoGAF]
In this article: 20gb, 512mb, arcade, breaking news, BreakingNews, core, new xbox experience, NewXboxExperience, xbox, xbox 360, xbox 360 arcade, xbox live, Xbox360, Xbox360Arcade, XboxLive
All products recommended by Engadget are selected by our editorial team, independent of our parent company. Some of our stories include affiliate links. If you buy something through one of these links, we may earn an affiliate commission.
Share
Tweet
Share