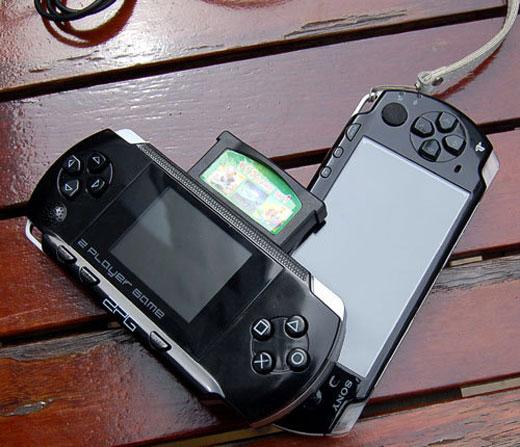 The 2PG TC8281 is one hard working portable game console -- and trust us, it ain't easy trying to make a living under the shadow of the PSP and its less expensive (and downright irreputable) siblings. Don't blame the poor guy if he was born with "brand name style," as they say in the business -- what he lacks in originality, or in technological ability, he more than makes up for in hard work. Yours for just under $50, this handheld is compatible with the ever-popular Cool Boy game console, and ships with 117 games (5 on-board, 112 on the cartridge) including Milk Nuts, Space ET, Zippy Race and perennial favorite Mappy. And if all that weren't enough, the device includes A/V outputs for bringing the party to your television, and a separate Playstation-like controller so you can get your game on multi-player style. Ready to take a chance? More pictures after the break.

In this article: 2PG, 2PG TC8281, 2pgTc8281, cool boy, Cool Boy Game Console, CoolBoy, CoolBoyGameConsole, keepin it real fake, KeepinItRealFake, kirf, knockoff, mappy, psp, pspknockoff, ripoff, TC8281
All products recommended by Engadget are selected by our editorial team, independent of our parent company. Some of our stories include affiliate links. If you buy something through one of these links, we may earn an affiliate commission.
Share
Tweet
Share