NASA regains contact with spacecraft after a 2-year silence 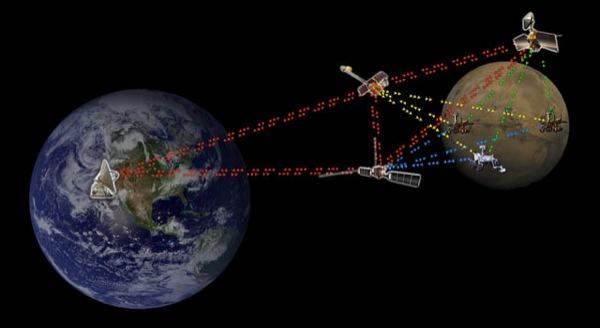 NASA is reporting the first successful tests of its Deep Space Network modeled after Earth's own Internet. Instead of using TCP/IP, however, the interplanetary communication network relies upon DTN (Disruption-Tolerant Networking) co-developed by none other than Google's Vinton Cerf. As such, NASA's network does not assume a continuous end-to-end connection -- if a link is lost due to solar storms or a planetary eclipse, the communication node will store the information until the connection is re-established. So, what's the big deal you rightly ask, after all, we've been (purposely) transmitting data to and from space for a half-century. As Leigh Torgerson, manager of NASA's DTN Experiment Operations Center explains it:

"In space today, an operations team must manually schedule each link and generate all the commands to specify which data to send, when to send it, and where to send it. With standardized DTN, this can all be done automatically."

Testing of the Deep Space Network began in October with twice-weekly communications between NASA's Epoxi spacecraft (on a mission to rendezvous with Comet Hartley 2) and nine ground-based nodes meant to simulate Mars landers, orbiters, and operation centers. The International Space Station is scheduled to join the testing next summer. Although the nature of the data transmitted wasn't specified, we can only presume that it was laced with Google ads for Mr. Lee's Greater Hong Kong.
In this article: deep space network, DeepSpaceNetwork, dtn, epoxi, international space station, InternationalSpaceStation, internet, nasa, vint cerf, VintCerf
All products recommended by Engadget are selected by our editorial team, independent of our parent company. Some of our stories include affiliate links. If you buy something through one of these links, we may earn an affiliate commission.
Share
Tweet
Share