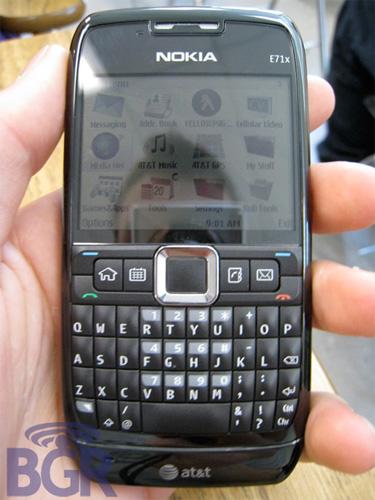 We've been hearing for ages that there was a super-special version of the E71 with an AT&T ROM floating around somewhere in Nokia's skunkworks, but solid evidence of its existence has been scarce to say the least; some said it was canceled, some said it was just taking its sweet time going through the testing process, and some put a hand over our mouth and told us never to speak "AT&T" and "E71" in the same sentence again lest an agent overhear us. New in-the-wild shots give us -- and the North American S60-loving public -- newfound hope that the phone's gonna actually happen, but it'll emerge as the "E71x." That's a new suffix for Nokia, so we really have no idea what it might mean -- more internal memory would be cool, but we're not really counting on it. Word is that it'll be available for something in the $150 range when it finally hits, so if the 6650 isn't your cup o' tea, hang tight. (And by the way, guys, we're totally digging the black.)
In this article: att, e71, e71x, nokia
All products recommended by Engadget are selected by our editorial team, independent of our parent company. Some of our stories include affiliate links. If you buy something through one of these links, we may earn an affiliate commission.
Share
Tweet
Share