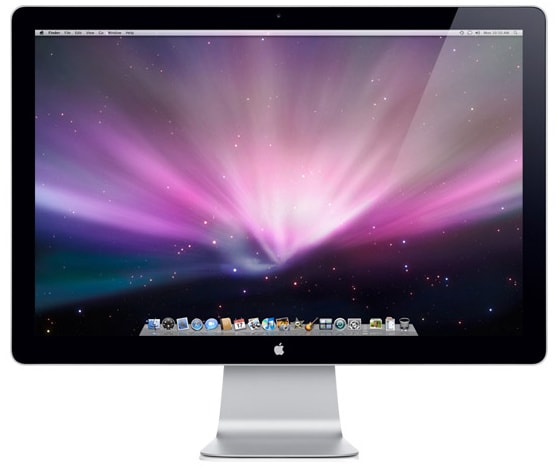 Prior to October 14th of this year, Apple hadn't updated its Cinema Display line in years. Literally. There's no doubt that this refresh is entirely overdue, and we still hold that Apple should've taken the opportunity to refresh its now-archaic 20 and 30-inch counterparts. All that aside, this writeup is about the new 24-incher, a LED-backlit beauty that doesn't mind being called glossy and is clearly partial to notebooks. The screen packs the same 1,920 x 1,200 resolution that was on the 23-incher it replaced, but ditches that DVI connector in favor of the newer, less widely adopted DisplayPort. So, is the newfangled screen worth $899? Read on to find out.
Apple
LED Cinema Display

How would you rate the LED Cinema Display 24-inch?
We want to hear what you think. Post a quick review now to join the conversation!
Write a review

Design wise, the new LED Cinema Display isn't a far cry from Apple's prior (er, still current, kind of) line. It's relatively sleek, completely fashionable and 100% Apple. It's simply silver and black, and it meshes well with the motif found on the outfit's latest laptop line. The "cheese grater" grille on the bottom of the screen -- which enables the "2.1" sound system to cut through -- is a nice touch, though you'll probably never look at it after giving it a peek upon the initial unboxing. We've never been a fan of the Cinema Display base, and we're no closer to falling in love now. The inability to adjust it north and south (it simply tilts down and back) is a real pain for us. Sure, you can remove the base entirely and mount it on a VESA-compatible arm, but seriously, who's doing that? In all honesty, the angle is just about right for most, but it's a niggle we can't help but point out.

'Round back, you'll find a large, mirrored Apple logo, a recessed port for the AC adapter and another port that's filled with a tri-prong cable (USB 2.0, MagSafe power and Mini DisplayPort). There's the obligatory Kensington security slot and a trio of USB 2.0 sockets too, but that's sadly where the connectivity options end. No HDMI input, no possibility for a breakout box, nothing. In other words, you can forget about hooking your Xbox 360 up to this thing when it's not handling your desktop activities. Needless to say, we were a bit bummed to see additional video inputs completely omitted, but strangely, not at all surprised.The recline on the base is nice and smooth, and it always held solid whenever we changed its position. Oh, and yeah, it's pretty striking to look at. Just make sure you have a good duster, as the glossy screen pulls dust out of places you never knew existed. We generally wouldn't bother with mentioning a monitor's audio qualities specifically, but Apple has clearly given this screen something worthy of talking about. Audio is delivered automatically over USB 2.0 from one's laptop to the screen, and while we can only chuckle at the ".1" part of the "2.1" audio system, the quality is darn impressive. When hooking up your notebook, audio is instantly ported from the lappie's speakers to the monitor's speakers when the USB connector of the tri-prong cable is hooked up, and the clarity is superb. It gets plenty loud for desk use, and it does a noteworthy job of dispersing sound in a way that envelopes the user. In other words, it actually sounds like stereo, not just a puny tweeter doing its best to crank out full-range monaural sound.

So, the $64,000 question -- does the thing even look good? In a word, yes. In a couple of words, absolutely yes. The LED backlight is responsible for delivering a striking, bright and incredibly crisp image that looks good while playing back fast-moving action or just displaying your mundane desktop. It's actually rather scary how bright this thing gets, so don't worry about being able to see it in broad daylight. Those familiar with the display on the new MacBook Pro are fully equipped to understand the LED Cinema Display, as the qualities between the two are practically identical. Whites are starkly white, blacks are decidedly deep and overall, it's just enjoyable to look at. Visually, we really don't have any complaints worth harping on.

Now, about that glossy coating. We mentioned that it's bright enough for use in an office surrounded by open windows, but sadly, you'll see every decoration in said office just as frequently (via reflections) as your see your applications. Particularly in bright light, the glossy coating doubles as a mirror, and while you can certainly look through and adjust your eyes to tone it out, it's a quality that's distinctive enough to make mention of. In fact, if you're not already comfortable with working on highly glossy displays, we wouldn't buy this one without a trip to the Apple Store to see it for yourself. Sure, the colors certainly "pop" more thanks to the glossy panel, but we still prefer matte when it comes down to it. Again, this is completely subjective -- you owe it to yourself to check it out and see if it's a bother.

On a related note, the viewing angles on this monitor were nothing short of terrific. We could see everything on the screen from practically every angle that you'd ever find yourself at, and we had no complaints from a small group that we rounded up to watch a 1080p movie trailer.

Apple makes no bones about the fact that this monitor was built with MacBook / MacBook Pro / MacBook Air owners in mind. It's a notebook owner's display, if you will. We didn't fully appreciate the convenience of an included MagSafe power adapter until we began moving from one floor to another. Not having to unplug and tote your AC adapter with you when moving to "desktop mode" is a really, really nice touch. You simply plug the monitor into the wall, connect the MagSafe / USB 2.0 / Mini DisplayPort adapter to your unibody MacBook (or Pro / Air), and you're ready to go. You can even connect it with the lid closed and operate in "lid closed" mode should you choose. Everything was extremely snappy in terms of connecting / disconnecting from the display; our MacBook Pro immediately adjusted to its new friend when the tri-prong cable was all hooked up, and it didn't lag up when things were suddenly unplugged on a whim.

The 24-inch LED Cinema Display is a well thought-out product. It's the first display that isn't ashamed to be built for notebook owners, and the simple inclusions that make it unique are incredibly handy and entirely useful. A built-in power adapter (MagSafe) and integrated speakers that don't sound horrendous are two features we quickly learned to appreciate, and the visuals weren't too shabby, either. That said, we've got plenty of beef with this thing. The move to Mini DisplayPort is fine, but charging $29 for a Mini DisplayPort to DVI (or VGA, as a separate adapter) is kind of ludicrous. Leave it to Apple to equip its new display with a single output format; if you want to use any port that's been remotely popular in the past few years, you'll be coughing up some extra -- a lot extra if springing for the $99 Mini DisplayPort to dual-link DVI adapter.

Also, why not provide a few auxiliary inputs here? This would be a killer multi-faceted display if it would openly accept HDMI, VGA, component or even S-Video from alternate sources. These days, folks are looking for utility in the devices they buy, and we're not so sure a one-trick-pony display is going to be all that compelling when there are literally dozens of similarly sized alternatives that welcome standalone game consoles, DVD players and cameras / camcorders. Don't get us wrong, this device is exceptional at being a computer monitor, and the price isn't at all absurd given its size and LED backlight, but we're still left yearning for a tiny bit more in the connectivity department.

Our bottom line? Apple's 24-inch LED Cinema Display is a winner, but it's a winner with reservations. If you're totally kosher with Mini DisplayPort, and you don't mind the omission of additional inputs, and you're confident the glossy panel won't turn you off, you'll be hard pressed to find a better LED-backlit screen at this size and at this price point -- particularly if you're a MacBook / MBP / MBA owner. 31
In this article: 24-inch, apple, Cinema Display, CinemaDisplay, features, hands-on, LCD, LCD monitor, LcdMonitor, LED, LED Cinema Display, LedCinemaDisplay, monitor, pics, pictures, review, reviewed
All products recommended by Engadget are selected by our editorial team, independent of our parent company. Some of our stories include affiliate links. If you buy something through one of these links, we may earn an affiliate commission.
Share
Tweet
Share