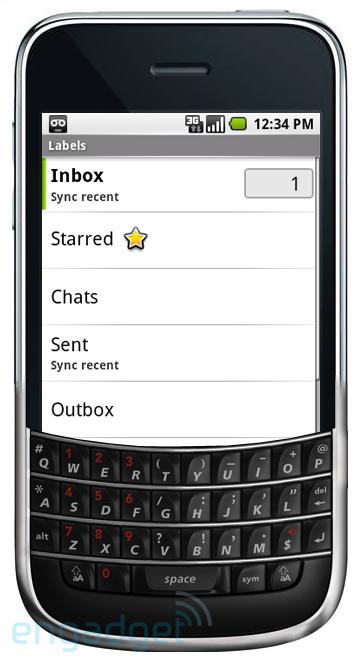 This year, all I really wanted for the holidays was the perfect smartphone. Not too much to ask for, right? You'd think, but all I ended up with was constant swapping between 3 (or more) devices, hoping to find some balance of features that worked for me. Instead of one "go to" phone, I juggled the iPhone 3G, T-Mobile G1, and BlackBerry Bold for the last few months, desperately wishing I could merge them into one perfect device. I shall now break down my hopes for the upcoming year, with a prayer in my little old heart that manufacturers are listening.

1: Give me the iPhone's ecosystem, processing power, and polish without the draconian approval process and limits on what developers can do.

It's pretty clear that right now Apple's take on app distribution is the way to go, and it's also pretty clear that the iPhone has enough juice to carry out just about any task with reasonable speed (3D gaming included). Unfortunately, the limits on what you can do within the developer agreement, and the hidden, shifting rules on what flies and what doesn't in the App Store make the whole process disheartening. The G1 (with its Android Market) has this almost right -- but it's going to take some time (and end users) to get really refined apps out the door.

2: Give me the Bold's keyboard and speed.

Look, not only is this phone one of the more enjoyable devices I've ever had the pleasure of typing on -- it's insanely fast. The Bold is probably the fastest, most responsive phone I've ever used... and I've used a lot. Sometimes waiting for the iPhone or G1 to switch between apps can seem like an eternity, and don't even get me started on finding a phone number or email address. The Bold truly excels at speeding up workflow -- so manufacturers, take note. And the keyboard? Heaven on Earth. No, really. The iPhone's virtual keyboard is useable (with some serious practice), and the G1 works just fine (save for that annoying "chin," and the fact that you have to flip out the screen whenever you want to type) but I'll take the physical, portrait-oriented QWERTY of the Bold any day.

3: Give me the G1's open source roots and (most importantly) Gmail integration.

Sorry guys, but I'm far too hooked on Google's kooky email ideas at this point to tolerate anything less than its full feature set on a mobile device. The Gmail Java app for phones almost hits the right note in its newest iteration, but it's still lacking proper label management and push notification. The G1 is the only device that actually uses Gmail the way Google intended it. Couple that with the super-fast push service, and it's a regular love-fest. Lately, I can't stand to look at email on the iPhone -- so I carry the G1 just for that. Also, unlike the iPhone, I can actually use different browsers on this if I want, and developers can actually make apps the way they want.

4: Get syncing right once and for all.

Here's where the Bold takes a few hits. Sure, I can sync my contacts and calendars from Gmail, but good luck getting it from my laptop directly. No, for that an elaborate scheme is required involving third-party apps and a voodoo incantation I picked up in Haiti, and it doesn't always work. Ditto for pictures and music on the G1. There needs to be centralized, OTA syncing for devices, and it needs to happen yesterday. I'll give the iPhone this -- I can't even remember the last time I had to sync it physically. Once Apple got those MobileMe kinks worked out... it really does kinda work.

5: Make sure it has some screen real estate, and lose the resistive touch.

The iPhone and G1 sort of get this. But next year, these things better come to the table with Touch HD resolution. Sure, we've got decent browsers and video playback -- but don't make us squint anymore. This is why I jettisoned my Treo 750. And resistive touchscreens? Let's all just slide the styli back into their slots, and move towards a brighter, more capacitive future. Trust me, it is better.

So I know what you're thinking. Open source heart, some graphics horsepower, a nice landscape screen, but a portrait QWERTY keyboard... someone's going to come along with this thing, right?

Well, let's hope not, because I know you can do better. So listen giant cellphone conglomerates: 2009 will be our year -- let's make it happen... together.

And commenters, I'd love to know what you wanted (but didn't get) in a phone this year. Sound off below!
In this article: blackberry, bold, editorial, features, g1, htc, iphone, iphone 3g, Iphone3g, smartphone, smartphones, t mobile, t-mobile g1, T-mobileG1, tmobile, touch hd, TouchHd
All products recommended by Engadget are selected by our editorial team, independent of our parent company. Some of our stories include affiliate links. If you buy something through one of these links, we may earn an affiliate commission.
Share
Tweet
Share