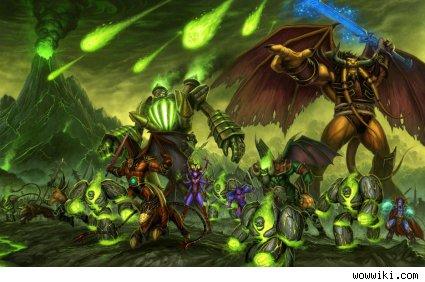 Just as a warning, today's Ask a Lore Nerd has a couple of spoilers for Wrath content. At this point, I assume that light Northrend spoilers isn't going to scare people off, but I figure I should mention it anyway. It's nothing major, so you won't ruin your experience by reading it anyway. Let's dig in!

Blizzard's said that there's enough material for plenty of more expansions after Wrath of the Lich King, and there's plenty of possibilities, but what expansion should come next lore-wise?

Personally, what I would like to see is for Blizzard to take another shot at the sci-fi elements they tried with The Burning Crusade. Outland suffered from being too techy, too bright. Even if you liked the out-of-this-world crystalline decor and space-age tech making an entrance in Warcraft, the degree at which it was used made you sick of it really fast. Psychedelic crystals were pretty... for awhile. Outland, they were in half of the zones. That's far too much, especially when all of those areas see heavy traffic, like 3 instances and a raid zone, for example.

Come on, if it's done right, you can't tell me taking the fight to the Burning Legion and invading their worlds for once isn't an attractive prospect. I think that has the potential for expanding the Warcraft universe moreso than just bopping around in the Maelstrom, too. Learning more about the Legion beyond what we've seen on Azeroth, meeting other races, developing the story right before our eyes rather than just dealing with leftover baggage from the RTS games. Lots of potential.

Uh, what's up with the giant, flying, glowy trees in Crystalsong forest? Did I miss a quest chain or something? Why are they giant/flying/glowy? "Magic", sure, but I think I need more. Why?

Some of my guildies suggested "because Dalaran is there", and I buy that maybe Dalaran is in Crystalsong *because* of the trees - but it still doesn't explain the trees. Others suggested Dalaran is somehow *responsible* for making them giant and/or flying and/or glowey - but I didn't see any of that in Alterac.

The only backstory we have on that zone is from Lands of Mystery, one of the RPG books. What does that mean? Well, things that come out of the RPG books are really up in the air as far as how canon they may or may not be. The story of Crystalsong Forest as it's told in Lands of Mystery might change when the zone actually gets quests and is itemized.

It was the site of a massive battle between dragons, the Blue Dragonflight and the Black Dragonflight. Whenever a Blue Dragon died, loose magic escaped their bodies and filled the air (think the elementals from Karazhan). Eventually, one of the older dragons at the battle conjured a great spell to freeze the attacking dragons, and the loose magic floating around amplified it to an unexpected degree. The spell was massive, and crystallized the entire battlefield rather than just the enemy dragons. It's stayed that way ever since.

This was around the time of the Sundering, and those Night Elf-esque ruins you see there were most likely Highborne ruins. Supposedly in Wrath, the Silver Covenant and the Sunreavers are fighting over these ruins, but that's not actually reflected in-game at all. My guess remains that in a content patch, we'll see this place come to life with all sorts of stuff.

What's the big, glowing, circle... thing inside the keep in Wintergrasp (and SotA)?

In Storm Peaks at the Maker's Library there are a bunch of Mecho-gnomes. Is this the possible origin of the playable race of gnomes? As they are guardians of the library, so it sorta of makes since that the playable gnomes are obsessed with knowledge.

Yes, that's exactly right. There are quests around Northrend that explain it, including some at the Gnome town in Borean Tundra. The Gnomes were Titan creations, just like Dwarves and Vrykul.

Ask a Lore Nerd is here to answer all of your questions about the lore and story of the Warcraft universe. From the religions of the universe to the 'evils' of Azeroth, everything is fair game. If you want more in-depth answers to some of your questions, you may find what you're looking for in Know Your Lore.
In this article: burning-crusade, burning-legion, crystalsong-forest, dwarves, emerald-dream, gnomes, highborne, lands-of-mystery, maelstrom, silver-covenant, strand-of-the-ancients, sunreavers, the-sundering, titans, vrykul, wintergrasp
All products recommended by Engadget are selected by our editorial team, independent of our parent company. Some of our stories include affiliate links. If you buy something through one of these links, we may earn an affiliate commission.
Share
Tweet
Share