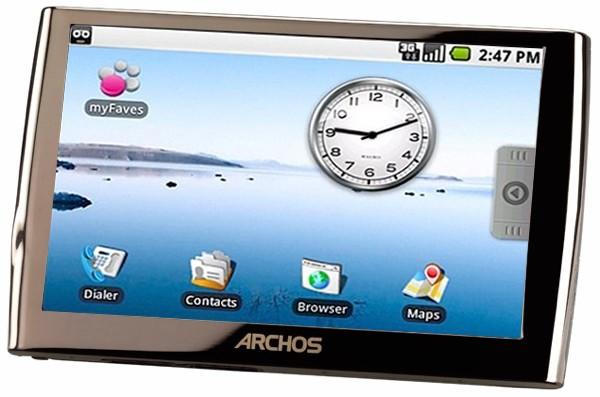 We're guessing we'll hear more about this at MWC, but TI just let loose a press release crowing about Archos's use of the OMAP3 processor in an upcoming "Internet Media Tablet" that runs on Android and also doubles as a phone. No pictures yet, but the spec sheet makes it sound like a hotrodded Archos 5: five-inch screen, up to a 500GB hard drive, a battery capable of 7 seven hours of video playback, and Flash support, all in a package just 10mm (.39 inches) thick. The underlying OS will be Android, but Archos plans to really beef up the media features -- there's even mention of HD video playback. That sounds seriously sweet -- if Archos ditches the current mushy resistive screen in the 5 for a capacitive unit, this could be a knockout Android device when it launches in the third quarter.

[Via Archos Lounge; thanks, Daphné]
In this article: android, archos, internet media tablet, InternetMediaTablet, mwc 2009, Mwc2009, omap3, portable audio, portable video, portableaudio, portablevideo
All products recommended by Engadget are selected by our editorial team, independent of our parent company. Some of our stories include affiliate links. If you buy something through one of these links, we may earn an affiliate commission.
Share
Tweet
Share