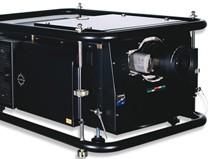 Like it or not, 3D is making its way into the home -- slowly, but surely. As a followup to the TITAN 1080p-3D at ISE Europe, the company has introduced no fewer than fourteen 3D-capable projectors. Up first is the iVision sx+ 3D and iVision sx+W-3D, both of which are single-chip beamers that weigh in at seven pounds and feature SXGA+ resolutions. The differentiating factor is that the former sports a standard zoom lens, while the latter is equipped with a short throw ratio fixed lens. Moving on, we've got the overloaded TITAN 3D range, which is comprised of eight different DLP-based models that are available with SXGA+ or 1080p resolutions. For 3D applications requiring the highest lumen performance, the LIGHTNING 3D line mimics the TITAN family while upping the lumens to 21,000 and bumping contrast to 4,000:1. No prices are mentioned, but you can tap the read link for more details on the full lot.

In this article: 3d, 3d projector, 3dProjector, Digital Projection, DigitalProjection, hd, iVision, LIGHTNING, others, projector, TITAN
All products recommended by Engadget are selected by our editorial team, independent of our parent company. Some of our stories include affiliate links. If you buy something through one of these links, we may earn an affiliate commission.
Share
Tweet
Share