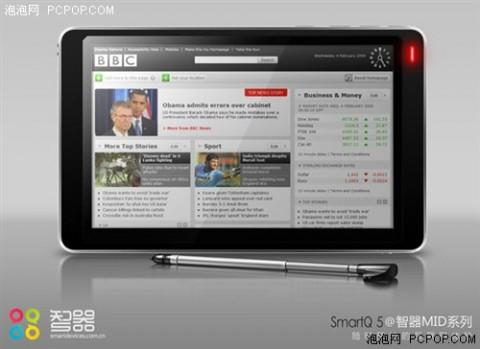 It looks like it may still be quite a while before it actually ends up on store shelves, but this new SmartQ 5 PMP / MID seems like it should be able to at least muster up a bit of interest when and if it is ever released. While complete specs are a little light, and most likely not finalized, the device will apparently boast a 4.3-inch 800 x 480 touchscreen, built-in WiFi and Bluetooth, and four hardware buttons to give the touchscreen a rest once in a while. Not much more than that, unfortunately, although SmartQ does seem to be pitching this one squarely as an internet device first and media player second, so hopefully that means it'll pack enough capabilities to truly earn that MID moniker.

[Via SlashGear]
In this article: portable audio, portable video, portableaudio, portablevideo, smartq, smartq 5, Smartq5
All products recommended by Engadget are selected by our editorial team, independent of our parent company. Some of our stories include affiliate links. If you buy something through one of these links, we may earn an affiliate commission.
Share
Tweet
Share