Nokia E55 hits the FCC if the E52 isn't your style 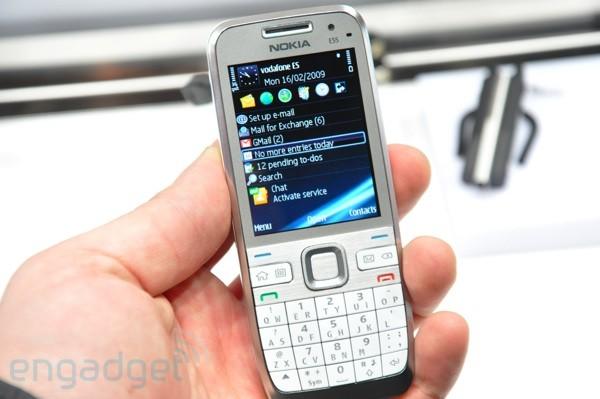 We sniffed out Nokia's new E55 not-a-QWERTY QWERTY candybar phone, which uses a SureType-esque predictive text mechanism with two letters per key, and looks pretty good doing it. Nokia's calling this the "world's thinnest smartphone," quite the feat if it's true, and it might just give Nokia's ultrapopular E71 a run for its money in the "fashionably smart" category. We played with the phone for a brief moment, and though it's running an alpha software build, we didn't have much trouble typing out a quick message. Unfortunately, while the keys are naturally larger, they aren't very "clicky" or distinct -- not horrible, but certainly not best-in-class. The prediction works well enough, learning new words after one entry, and letting you d-pad up and down through other options if it doesn't get it right the first try. Overall the phone feels on par with quality of the E71, though lighter and smaller, and is insanely pocketable. Video is after the break. In this article: e55, e71, featured, features, hands on, hands-on, HandsOn, mwc, mwc 09, mwc 2009, mwc09, Mwc2009, nokia, nokia e55
All products recommended by Engadget are selected by our editorial team, independent of our parent company. Some of our stories include affiliate links. If you buy something through one of these links, we may earn an affiliate commission.
Share
Tweet
Share