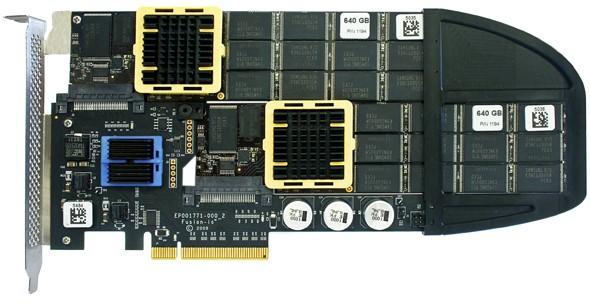 While it's going to be tough for Fusion-io to get its ioDrive any faster in the near term, it ain't so tough to make the world's fastest storage more capacious. Shortly after pulling The Woz in as its chief scientist, said outfit has just revealed the next-generation ioDrive, predictably coined ioDrive Duo. The PCI Express-based solution throws 160GB, 320GB, 640GB or 1.28TB of stupid fast SSD storage directly onto your motherboard, enabling it to boast sustained read bandwidth of 1,500MB/sec and write bandwidth of 1,400MB/sec. The smallest three will be available next month for prices we don't even want to guess, while the 1.28TB model is slated to ship shortly after OCZ's 1TB Z Drive in the latter half of 2009.

[Via HotHardware]
In this article: fusion-io, fusionio, iodrive, ioDrive Duo, pci express, PciExpress, SAN, SSD, storage
All products recommended by Engadget are selected by our editorial team, independent of our parent company. Some of our stories include affiliate links. If you buy something through one of these links, we may earn an affiliate commission.
Share
Tweet
Share