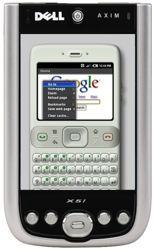 Depending upon which source you believe, Michael Dell either directly commented on Dell's smartphone plans or just hinted at them. DigiTimes has Michael Dell paraphrased as saying in Taipei that Dell will not delay its smartphone lineup and is on schedule to release devices in line with its internal roadmap. The IDG news service, however, has him in Tokyo just hinting at smartphones. "It is true that we are exploring smaller screen devices," said Dell, adding, "We don't have any announcements to share today but stay tuned as when we have new news we will share that with you." Mr. Dell also mentioned Dell's carrier agreements already in place for the 3G radios Dell ships in it laptops. As such, "it wouldn't be unreasonable to expect that we would have smaller mobile Internet devices or smartphones in the future." Look Michael, just spit it out. We don't care how dull they look -- we know you're probably going after the big, fat chewy center of corporate market share here. Just don't call it the Ditty Talker and we're cool.

In this article: dell, dell smartphone, DellSmartphone, digitimes, michael dell, MichaelDell, rumor, smartphone
All products recommended by Engadget are selected by our editorial team, independent of our parent company. Some of our stories include affiliate links. If you buy something through one of these links, we may earn an affiliate commission.
Share
Tweet
Share