'Let's Pizza' machine cooks you a pie in three minutes, won't ask you to enter any contests 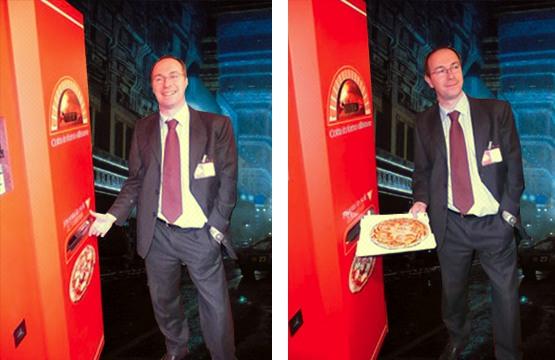 Bob Bibleman has had bad luck with technology lately. The last time a robot cooked for him he found himself involved in some sort of quasi-military intrigue, and his robot lawnmower sure seems like it's up to something. But when ol' Bob ran across a report in the Times (UK) that a venerable Italian gentleman named Claudio Torghele had invented "Let's Pizza" -- a machine that makes pizza from scratch, in three minutes -- he decided to give technology one more chance. The device sports a glass window through which you can watch the machine mix and knead the dough, spin it into shape, add the sauce and toppings, and cook it to perfection. A pie will run you about €3.50 (or just under five bucks), and the machine is due to hit the streets sometime this summer. Now that Mr. Bibleman has that sorted out, maybe he'll be brave enough to let technology help him with other areas of his life -- we hear that JDate's really something.

[Via The Raw Feed]
In this article: Bob Bibleman, BobBibleman, Claudio Torghele, ClaudioTorghele, cooking, Italy, Lets Pizza, LetsPizza, pizza, pizza machine, PizzaMachine, vending machines, VendingMachines
All products recommended by Engadget are selected by our editorial team, independent of our parent company. Some of our stories include affiliate links. If you buy something through one of these links, we may earn an affiliate commission.
Share
Tweet
Share