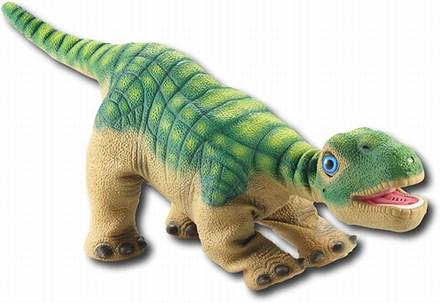 We don't have any official word on this as of yet, but as our main man Ryan Block noted in a tweet earlier (and Wired speculated on back in February), it looks like Pleo-maker Ugobe may -- in fact -- be extinct. As of this writing, the company's site was offline, and calls to the dino-bot factory have gone unanswered (though their voicemail system seems to be humming along just fine). While we haven't heard a peep one way or another from the folks in charge, Wired reported in its article that the company was struggling months ago to stay afloat in our sinking economy. Could it be that people just don't have a spare $350 to drop on a robotic toys these days? Say it ain't so. Whatever the case, you can be sure that just like actual dinosaurs, the legacy Pleo will leave behind is rich, storied, and often violent. How about you there in / on the Interverse... heard any news about Ugobe lately?

Update: A few of you wrote in to let us know that the Ugobe site is back up. Maybe Pleo ain't extinct yet?
In this article: extinct, folded, folds, out of business, OutOfBusiness, pleo, speculation, ugobe, under
All products recommended by Engadget are selected by our editorial team, independent of our parent company. Some of our stories include affiliate links. If you buy something through one of these links, we may earn an affiliate commission.
Share
Tweet
Share