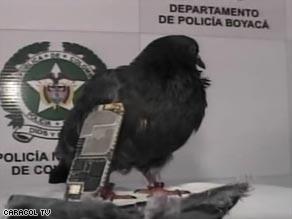 Back in late March and early April, when we first heard the terrifying tale of two shifty, hapless carrier pigeons intercepted while attempting to smuggle cellphone parts to inmates in a high-security Brazilian prison, we thought it was merely an isolated incident. Well, now that another pigeon has been caught -- this time outside a Colombian prison with a tiny suitcase full of cellphone components strapped to its back -- we have to face the truth: carrier pigeons are probably evil by nature. The Colombian authorities say that the pigeons are likely being raised inside the prison, then sent to the outside to collect the contraband handsets before doing what pigeons do best -- returning home. The officials also admit they are relatively powerless to combat the problem, though the intercepted bird is now imprisoned at a local animal shelter. So... how long until a different carrier pigeon is intercepted trying to sneak a teensy KRZR into the incarcerated, winged criminal?
In this article: carrier pigeon, CarrierPigeon, cellphone, cellphones, columbia, criminal birds, CriminalBirds, pigeon, pigeons, prison
All products recommended by Engadget are selected by our editorial team, independent of our parent company. Some of our stories include affiliate links. If you buy something through one of these links, we may earn an affiliate commission.
Share
Tweet
Share