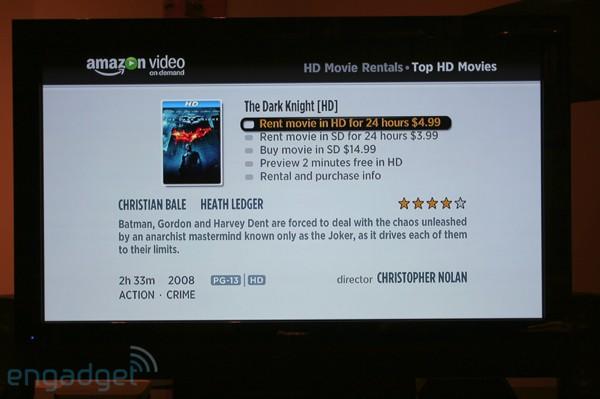 Roku hooked us up with an early preview of Amazon Video on Demand in HD for its Video Player, and while we didn't have much time to poke around, but what we saw was mostly impressive. Video took a little longer to buffer in than Amazon SD or Netflix's HD streams on our 10Mbps cable connection, picture quality was noticeably better, although still not at Blu-ray levels. Apart from the HD content, the experience on the Roku box is essentially same as always: there's still no search in the interface, so be prepared to hunt around for what you want -- anything other than popular or blockbuster titles requires a little digging. Selection and pricing seem to be about on par with Apple TV / iTunes, but you're getting a little less for your money, since audio is stereo-only compared to Apple's 5.1 encoding. That's a potential dealbreaker for us, but it might not matter to you, and Roku's $99 Video Player is now an undeniably appealing way to beef up your HD content options. Short hands-on video after the break. In this article: amazon, amazon video on demand, AmazonVideoOnDemand, featured, features, hands on, hands-on, HandsOn, hd, hd streaming, hd streaming video, HdStreaming, HdStreamingVideo, roku, roku video player, RokuVideoPlayer, streaming hd video, streaming video, StreamingHdVideo, StreamingVideo, video on demand, video player, VideoOnDemand, VideoPlayer
All products recommended by Engadget are selected by our editorial team, independent of our parent company. Some of our stories include affiliate links. If you buy something through one of these links, we may earn an affiliate commission.
Share
Tweet
Share