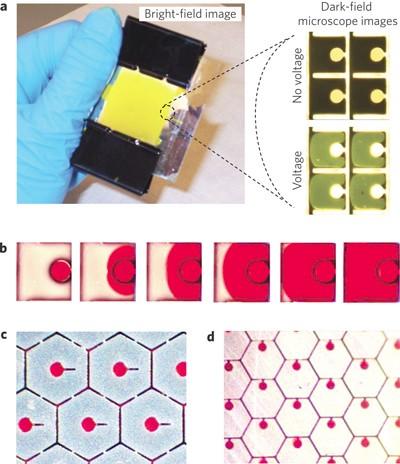 The race to develop a mass-market color e-ink display is at fever pitch, and there's a new challenger on the scene: electrofluidic display, or EFD. Developed at the University of Cincinnati in partnership with a handful of private companies, the new tech apparently blows everything else out of the water -- according to professor Jason Heikenfeld, EFD has superior brightness, color saturation, and video speed, all in a 15-micron thick panel that can eventually be used in rollable displays. No word on when we'll see any products, but the partnership is spinning off a new company called Gamma Dynamics to commercialize the tech, so hopefully it'll be soon.

Read - University of Cincinnati press release
Read - EFD paper in Nature
In this article: e ink, e paper, e-ink, e-paper, efd, EInk, electrofluidic, electrofluidic display, ElectrofluidicDisplay, electronic ink, ElectronicInk, EPaper, gamma dynamics, GammaDynamics, Jason Heikenfeld, JasonHeikenfeld, Polymer Vision, Sun Chemical, SunChemical, university of cincinnati, UniversityOfCincinnati
All products recommended by Engadget are selected by our editorial team, independent of our parent company. Some of our stories include affiliate links. If you buy something through one of these links, we may earn an affiliate commission.
Share
Tweet
Share