With some help from Realtek, PowerDVD will support 24-bit lossless audio 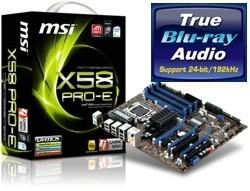 If you're building out your own HTPC rig, add the new MSI X58 Pro-E motherboard to the list of contenders for your dollars. The board packs an Intel X58 Northbridge / ICH10R Southbridge combo alongside Realtek ALC889 audio to deliver "True Blu-ray" audio. It's not terribly clear exactly how the marketing-speak plays out, but between the 24-bit, 192kHz audio specs and our cynical selves, we'd wager that this is all about sending Dolby TrueHD and DTS-HD MA downstream via LPCM rather than bitstream. All things considered, that's not a bad way to go (and not without precedent), but we'd really like bitstreaming support for HTPCs that's a little more streamlined than the current offerings; we want to see the fancy logos we paid for in our receivers light up, after all!

In this article: alc889, audio, dolby truehd, DolbyTruehd, dts-hd ma, Dts-hdMa, hd, htpc, motherboard, msi, msi x58 pro-e, MsiX58Pro-e, other hardware, otherhardware, others, realtek, realtek alc889, RealtekAlc889, true bu-ray, TrueBu-ray, x58 pro-e, X58Pro-e
All products recommended by Engadget are selected by our editorial team, independent of our parent company. Some of our stories include affiliate links. If you buy something through one of these links, we may earn an affiliate commission.
Share
Tweet
Share