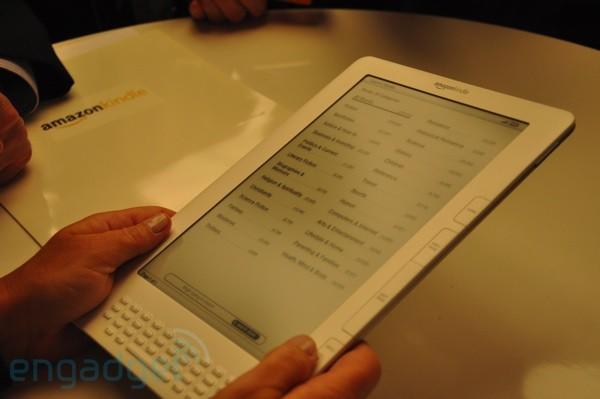 The Kindle DX launch might have sparked a wave of hype about the next generation of newspapers, but not everyone's so quick to agree: Dallas Morning News CEO James Moroney told a Senate subcommittee yesterday that the Kindle isn't a "platform that's going to save newspapers in the near term." According to Moroney, Amazon demands 70 percent of subscription revenue from newspapers, and further requires content owners to grant Amazon the right to republish content to other devices -- like, say, the iPhone. That's a pretty inequitable split, and while we understand that Amazon has to pay for Whispernet somehow, it's hard to imagine newspaper publishers lining up to wager 70 percent of their digital subscription revenues and a perpetual license to their content on devices that are far from proven. On the other hand, it's innovate or die time for these guys, so we'll see what happens -- with all the competitors out there poised to make a move, things are about to get interesting.
In this article: amazon, dallas morning news, DallasMorningNews, dx, e book, e reader, e-book, e-reader, EBook, EReader, james moroney, JamesMoroney, kindle, kindle 2, kindle dx, Kindle2, KindleDx, newspaper, newspapers
All products recommended by Engadget are selected by our editorial team, independent of our parent company. Some of our stories include affiliate links. If you buy something through one of these links, we may earn an affiliate commission.
Share
Tweet
Share