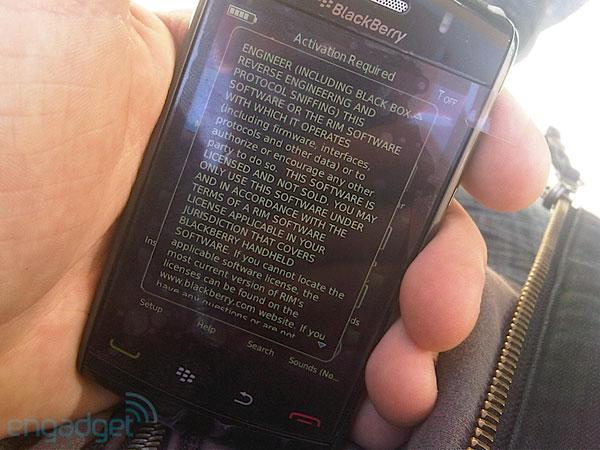 We knew it was coming, and just like its relatives the Onyx and the Gemini, yet another unreleased model has managed to escape the confines of RIM's Waterloo headquarters. This time, however, it's the Storm 2, which we've heard has been internally codenamed "Oden." We've also caught wind that this model pictured is of the GSM flavor, and yes, it's indeed packing WiFi in addition to GPS according to one of our sources. As far as that rumored "new approach to text entry," it sounds like the keyboard has been tweaked but isn't a radical departure from the first generation. From the photos, it seems that RIM has advanced in the war on buttons and axed the bottom four in favor of some touch-sensitive controls. The real improvements, however, appear to be under the hood, as the whole device reportedly runs much faster and smoother than the current model. We can't confirm these specs, but with the Tour coming this summer, and the Storm 2 hopefully making an appearance before the holiday shopping season, looks like you Verizon BlackBerry fans might not have to be that jealous of your GSM brethren after all.

In this article: blackberry, blackberrystorm, blackberrystorm2, leak, RIM, storm, storm 2, Storm2, surepress, verizon, verizonwireless, waterloo
All products recommended by Engadget are selected by our editorial team, independent of our parent company. Some of our stories include affiliate links. If you buy something through one of these links, we may earn an affiliate commission.
Share
Tweet
Share