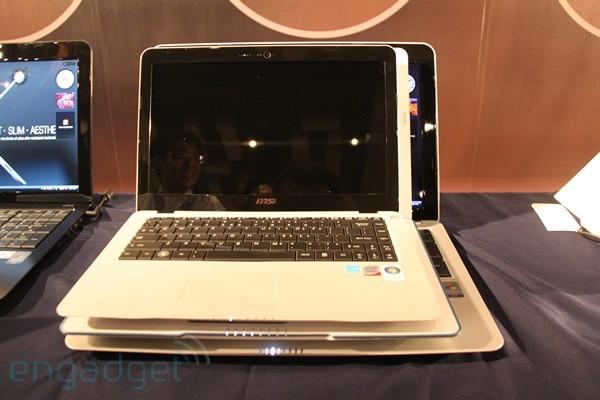 The big Computex show in Taipei is just a few weeks away and that means laptops, tons and tons of laptops. Specifically, CULV thin-and-light laptops that Intel's hoard of dutiful manufacturers have positioned between netbooks and super-expensive, ultra-portables like the MacBook Air or ThinkPad X301. Engadget Chinese is at the unveiling of MSI's full range of X-Slim laptops. We've already seen the X320/X340 up close, but this is the first time we've received official specs on the 14-inch (1366 x 768) X400 and 15.6-inch (1366 x 768) X600. Both feature Core 2 Solo CULV processors, an HDMI jack, hard disks up to 500GB in capacity, up to 4GB of DDR2 memory, and a 2-in-1 card memory reader. The X600 adds eSATA, options for 6 or 9-cell batteries (compared to the X400's 4 or 8-cells), and bumps the graphics from integrated GMA 4500MHD to ATI Mobility Radeon HD 4330. Now we're just waiting for the ship dates and prices which should start at $699 to about $1,100.

Update: Official press release says to expect these before June is through.
In this article: computex, computex 2009, Computex2009, core 2 solo, Core2Solo, culv, esata, hdmi, msi, thin and light, ThinAndLight, x-slim, x320, x340, x400, x600
All products recommended by Engadget are selected by our editorial team, independent of our parent company. Some of our stories include affiliate links. If you buy something through one of these links, we may earn an affiliate commission.
Share
Tweet
Share