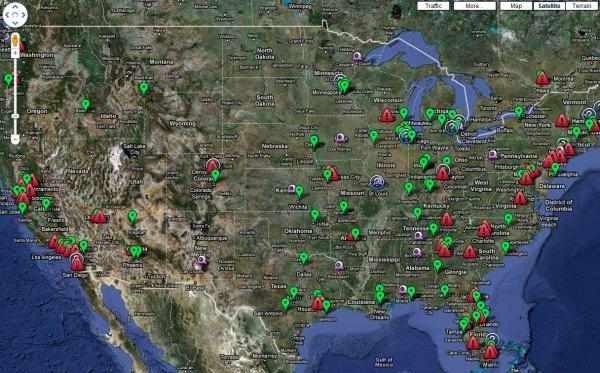 Since most of you are apparently waiting to see Star Trek at home anyway, this might not affect you but recently there's been a ruckus over what constitutes "real" IMAX. Judging from the map above, the company has been very successful spreading its IMAX Digital gospel to movie theaters across the country, but when patrons drop an extra $5 or so and don't see the gigantic field of vision-filling screen they're used to, is that really the IMAX experience? Whether you agree with IMAX CEO Richard Gelfond that the quality of digital projection, improved sound and slightly shifted viewing angle is enough to create the "wow factor" or Aziz Ansari's accusation of Liemax for the converted theaters, it's not right that it usually isn't clearly indicated which kind of setup your local theater has until you're actually inside. Check out the Google Map link to know what your local moviehouse is like, and let us know which kind of screen you've seen recent blockbusters like The Dark Knight and Star Trek on.

Read - AZIZ VS. IMAX ROUND 2: IMAX CEO Responds! And so do I. I challenge you to a televised debate sir!
Read - IMAX Digital vs. 70mm IMAX Google Map
In this article: 2k, 70mm, aziz ansari, AzizAnsari, hd, imax, imax digital, ImaxDigital, liemax, star trek, StarTrek, the dark knight, TheDarkKnight
All products recommended by Engadget are selected by our editorial team, independent of our parent company. Some of our stories include affiliate links. If you buy something through one of these links, we may earn an affiliate commission.
Share
Tweet
Share