We got our hands on the Verizon HP Mini 1000 (or, as it's more properly known in this form, the 1151NR) recently, and we've taken the little guy -- and its built-in 3G card -- for a spin. The Mini itself has a standard enough spec sheet: a 1.6GHz Intel Atom N270, 1GB of RAM, an 80GB HDD, two USB 2.0 ports, 802.11b/g, SD slot, and Windows XP, and there's no special Verizon branding to be found anywhere on the unit. We can't really take issue with the choice of machine, which is a fairly well-loved netbook with generally pretty solid performance. The important thing here, of course, is the addition of the big V's hardwired 3G. Did we fall in love with it? Does it make sense in the face of products like Verizon's MiFi 2200 EV-DO router? Will it alter future events forever? Read on to find out.
HP 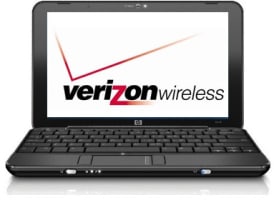 Out of the box set up was pretty breezy -- once we got through the prerequisite ten minutes of Windows updates and configuration. The Mini comes with VZ Access Manager software pre-installed and on the desktop, and after a quick run through of the activation wizard (less than a minute), you're connected. The Access Manager itself is pretty inoffensive, and in general we found that after fully starting up, it took an average of about 45 seconds to achieve a connection, and only once did it fail to connect on the first try. A full re-boot to active wireless connection took just about 3 minutes.

Once we were connected, we found browsing to be quick and nearly blip free. Scrolling through large pages (such as, say... Engadget) was slightly slower than we would have liked -- though that may have more to do with the Atom CPU than the connection. In general we found our basic, everyday tasks like browsing, checking our email, and watching Tegan & Sara videos on YouTube to be lag-free. We also had no trouble streaming Pandora in the background while watching a (muted) trailer for Taken in iTunes. The trailer took a few seconds to load up, creating a bit of latency, but once it got started we viewed it without any bumps along the way.

We saw speeds of up to 869kbps down and 524kbps up (averaging about 777kbps down and 455kbps up over four separate tests) -- a little less in terms of the download speed compared to the MiFi 2200 router -- but still pretty decent as far as we were concerned. Downloads did seem a bit slow to us -- it took almost 10 minutes to download the 7MB Firefox file, and about 15 to snag iTunes, but other than that, even multiple tabbing situations such as watching, say, a video of a cat on a Roomba while browsing CNN were without hiccups. This is probably not the machine or internet connection for heavy lifting, but for most things it's relatively snappy. It's also worth noting that we didn't notice any significantly increased battery drainage as a result of our heavy internet usage -- we still got about two hours and fifteen minutes off a full charge. Using the Mini as a portable strobe light, however, did produce noticeable effects.
Wrap-Up

Verizon's subsidized pricing of $199.99 (after the $50 mail-in rebate) with a two year activation on one of Verizon's Mobile Broadband plans works out to -- at a minimum -- $680 a year (Verizon offers a $39.99, 250MB per month plan, as well as a $59.99, 5GB per month plan). It's a bit pricey, but you still end up paying less than if you're buying the laptop outright and getting service separately.. Ultimately, this machine and -- its accompanying 3G card -- are likely going to be totally satisfactory for on-the-go, day to day tasks. People who are already accustomed to the netbook experience will no doubt find this to be a convenience over a USB dongle, though we'd personally prefer the flexibility of said stick. However, even if it doesn't exactly blow you away, you can't really find too much to gripe about here, and to be perfectly honest, we find ourselves growing more fond of the little guy by the hour.