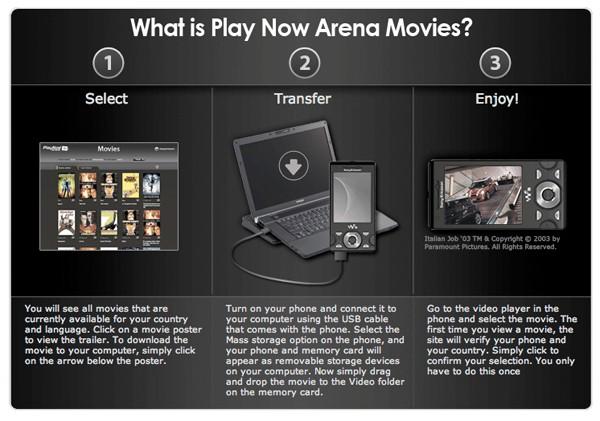 Everybody's getting into the mobile movie sideload business -- just ask Samsung -- and following an MWC unveiling earlier this year, Sony Ericsson is gearing up to launch movie content starting next month as part of its existing PlayNow Arena service. Direct on-phone downloads over WiFi or 3G would be awesome, but as most of these services tend to operate, PlayNow Arena will require that users select and download movies on their PCs, cable up their phones, and transfer the media the old-fashioned way, at which point they'll be playable on the device for 90 days. You'll be able to select from about 15 movies at any given time with content being cycled monthly -- ridiculously meager, yes, but when you consider that the service is bundled with certain phones (up to 60 movies a year), it's hard to pitch a fit. Look for it to launch on the W995 slider in Germany, Netherlands, Norway, Sweden, and the UK in June; support for Sony Ericsson's newly-announced Satio and Aino (among others) is expected later in the year.
In this article: ericsson, movies, playnow, playnow arena, PlaynowArena, portable video, portablevideo, sony, sony ericsson, SonyEricsson, w995
All products recommended by Engadget are selected by our editorial team, independent of our parent company. Some of our stories include affiliate links. If you buy something through one of these links, we may earn an affiliate commission.
Share
Tweet
Share