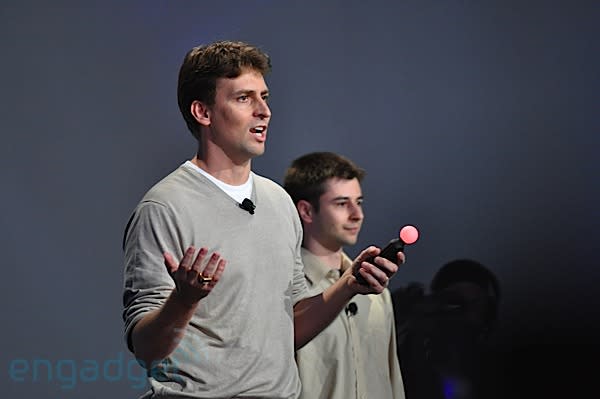 Sony just announced the rumored new motion controller for the PS3 -- the prototype looks like a wand with a color-changing ball on top. It's designed to work in conjunction with the PlayStation Eye, with the wand overlaid on-screen with a weapon or tool. Unlike Microsoft's Project Natal, Sony says they've learned "some experiences need buttons," which is why there's still a controller involved. The system is said to be "sub-millimeter" precise, and it was demoed drawing and playing a shooter -- it's sort of the middle ground between Natal and Wii Motion Plus. Sony says it'll launch in the spring of 2010, but we don't know what pricing will be like yet. In this article: breaking news, BreakingNews, e3, e3 2009, E32009, motion capture, motion control, MotionCapture, MotionControl, playstation, playstation 3, Playstation3, sony
All products recommended by Engadget are selected by our editorial team, independent of our parent company. Some of our stories include affiliate links. If you buy something through one of these links, we may earn an affiliate commission.
Share
Tweet
Share