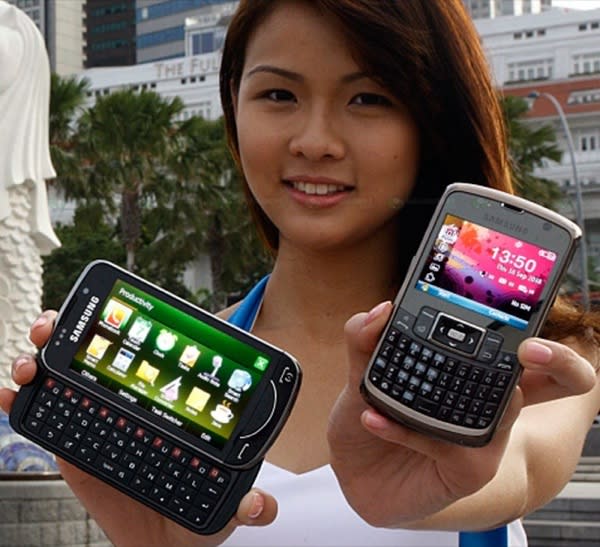 Samsung's being tight-lipped with the details, but at least it did us the solid of making its Omnia Pro B7610 (aka, B7610 Louvre) QWERTY slider official today at CommunicAsia. The phone on the right is the Omnia Pro B7320, which, if we're not mistaken, is just the Jack candybar already available to AT&T customers. Unfortunately, Samsung isn't giving out any detail on the B7610 so we'll have to go on believing in the rumored 3.5-inch AMOLED display with 800x480 pixel resolution, 5.1 megapixel camera, 7.2Mbps HSDPA data, 802.11b/g WiFi, Bluetooth 2.0, 1GB built-in with microSDHC expansion, and 800MHz processor driving Windows Mobile until they tell us something different.

[Via Akihabara News]
In this article: b7320, b7610, candybar, communicasia, communicasia 2009, Communicasia2009, jack, omnia, omnia pro, Omnia Pro B7320, omnia pro b7610, OmniaPro, OmniaProB7320, OmniaProB7610, pro, samsung, slider, windows mobile, WindowsMobile, winmo
All products recommended by Engadget are selected by our editorial team, independent of our parent company. Some of our stories include affiliate links. If you buy something through one of these links, we may earn an affiliate commission.
Share
Tweet
Share