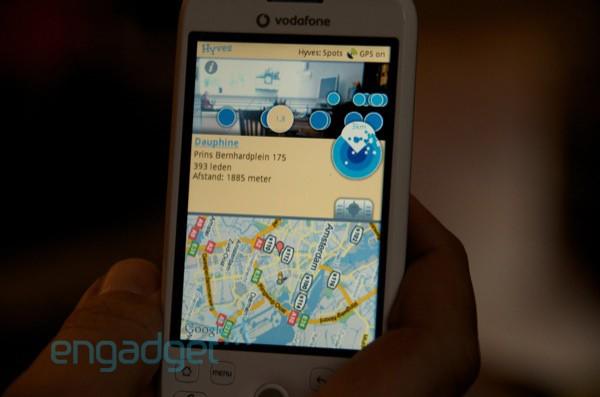 We had a chance to go hands-on with Layar, the new augmented reality browser from SPRXmobile. Launched yesterday on Android Market in The Netherlands, we were curious to see how the software, that looked damn-impressive in the promo video, would function in actual use, in this case, from the living room of SPRXmobile's Maarten Lens-FitzGerald just outside of Amsterdam. Our take? it's the real-deal, especially for a v1 release. The software looks rock-solid and the initial data layers -- ATMs, social joints like cafes and clubs, and job listings -- appear fully populated and thus, useful. The ATM and cafe/club layers (or layars) are definitely helpful for serendipitous discovery though we're still scratching our heads over the job search layar. See, what you're discovering are jobs you can apply for from that particular employment office, not jobs necessarily available in that specific neighborhood or office building. Next month, Layar will have access to what could be its killer app (or killer data layar) called Funda, the site in The Netherlands for finding places to rent or buy. Of course, you can imagine travel guide companies like Let's Go and Frommers jumping into this with huge effect as well. And really, it's content that's going to make this type of augmented reality software a success. Maarten tells us that more partner announcements are expected this week with expansion into the US, Germany, and UK anticipated later this year on Android devices and on the iPhone 3G S (compass required). Check the interview and demo after the break.

Update: New layers announced including Google local search (that's a ton of content), Tweets Nearby (exactly what it sounds like), and ANWB (Dutch AAA) coming in July.

In this article: augmented reality, AugmentedReality, features, hands on, hands-on, HandsOn, interview, layar, SPRXmobile
All products recommended by Engadget are selected by our editorial team, independent of our parent company. Some of our stories include affiliate links. If you buy something through one of these links, we may earn an affiliate commission.
Share
Tweet
Share