For the longest while, your options were highly limited in the waterproof / rugged point-and-shoot arena. In fact, it was arguably better to just buy a standard P&S camera and a waterproof casing for said camera than to worry over any of the standalone waterproof alternatives. When Canon introduced its PowerShot D10 earlier this year, we immediately noticed that this waterproof shooter was quite unlike the models before it. Outside of a somewhat bulbous casing, it didn't look drastically different than some of the thicker, non-waterproof options out there. Not to mention the respectable 12.1 megapixel sensor, 3x optical zoom and ten meter waterproof rating. Needless to say, we couldn't resist the opportunity to grab this bugger and test it out for a week along the shores of Playa Tamarindo in Costa Rica and Lago Cocibolca in Nicaragua, so follow us past the break to find out if this cam is the perfect accessory for your upcoming beach holiday. 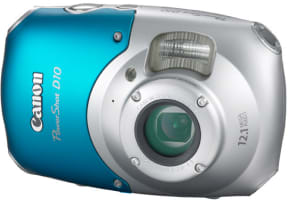 Unlike some of the more frail waterproof cameras out there, Canon integrated a certain level of toughness and rigidity into its D10. Indeed, the company markets this as an "adventure cam," and that's exactly what we went on with this by our side. Designed to be waterproof, freezeproof and shockproof, we were able to sufficiently test all but the middle quality down in Central America, and we have to admit that we're pretty impressed.

Just to give you an idea of what our PowerShot D10 survived, here's a quick rundown: hours upon hours in salty Pacific Ocean waters, numerous drops in the sand, countless button mashes from moist fingertips, a wild ride down Class II / III rapids, a snorkel tour with eels and puffer fish, lawless monkeys grabbing for shiny gadgets, a dodgy border crossing in the pouring rain and a few dips in the pool. And that's just the half of it. In other words, we sought to really see if Canon's D10 would live up to its own claims, and now that we're back -- nursing sunburned patches and mulling the decision to unpack or simply live out of a suitcase for the next month -- we figured it prudent to share our experience.

As a overall camera, the D10 will definitely suffice as your primary point and shoot if you're kosher with toting around a rather large (comparatively speaking) device. We always thought our SD850 IS was pudgy, but the protruding lens on the D10 makes this one even less convenient to tote around. Still, as an adventure camera, it's plenty small. If you're trekking through Nairobi or surfing on the North Shore of O'ahu, you can definitely make room in your backpack or cargo pocket for this. Weight wise, it's perfectly acceptable, and the brilliant decision by Canon to build in four accessory posts around the edges was one we learned to adore. Our D10 shipped with a small accessory kit, which included a trio of colorful face plates and a number of cables that can be affixed to any corner of the camera. The thick, braided cable with twin carabiners on the end proved invaluable in keeping the camera attached to our person while in rafts and getting tossed around like a rag doll in the mighty Pacific. If you're planning on using this in any kind of precarious situation, we'd highly recommend forking out the extra for it. Granted, we would've loved for at least one serious cable to come bundled in (a short wrist strap is all that ships with the unit itself), but hey, you can't have it all.

In most respects, the D10 looks and feels just like a normal camera. Sure, a few of the buttons are rubberized and there are nice internal seals on all of the port openings, but we were yelled at on numerous occasions from onlookers who thought we just accidentally ruined our regular camera by dunking it underwater. In fact, the bottom opening (where the rechargeable battery and SD / SDHC card is slotted) was so traditional that we were legitimately frightened that water would rush in as soon as we plunged in. Thankfully, not a drop of liquid managed to squeak into any port over a solid week of abuse and countless hours under water.

Of note, the rear LCD was truly a gem. Even in broad daylight, we never had an issue seeing the images on-screen. The button layout was also well designed, and Canon Digital Elph users will be particularly at home. The only major differences were the zoom mechanism -- which is handled by two rubber buttons to the right of the LCD -- and the movie mode, which is triggered by a button atop the LCD. Generally speaking, we had no issues navigating the UI, switching from movie mode to still mode (or vice versa) or zooming.

Start up was snappy (well under a second), and all of the buttons were well placed and easy to operate, even while submerged. Unfortunately, the actual shutter and autofocus performance didn't follow suit. In most cases, the camera focused quickly enough for us to capture whatever action was in front of us, but there were a few occasions where we missed out due to sluggish shutter response. It's hardly worse than the average non-waterproof point-and-shoot, but you best be on top of your game if you're hoping to snap that perfect shot before a wave eats you alive.

So, now that we've ran you through the basics, let's talk toughness. Canon advertises this shooter as one that's cut out for adventure, and after surviving more adventures in a week than we've faced in the entire year prior, we'd have to say it really delivers here. The camera didn't flinch after being drug through sand, shoved under salty waters for hours on end or banged up against a surfboard. It even managed to go mano-e-mano with a number of slippery rocks during a white water rafting tour, and it somehow escaped with only minor scratches. Frankly, we were shocked at how well the PowerShot D10 managed to handle abuse, and at the end of the week, everything still functioned like new.

Speaking of battery life, we were able to squeeze out around 45 minutes of VGA video along with a couple hundred snapshots before the battery warning indicator popped up. And, mind you, that's 40 minutes of having the rear LCD flipped on. Outside of that, we never once took enough shots to drain it completely in a day. We didn't go about any formal battery life testing, but overall we were mighty impressed by just how long the rechargeable cell held out. Unless you plan on firing off a thousands shots with flash, battery life shouldn't be a concern.

Now that we've established everything else, how's about the image quality? In a word, it's solid. When you consider that this is an "underwater camera," which typically arrive with lackluster image quality as a trade off for their adeptness in the seas, we'd say this is easily one of the best we've seen. While out of water, we generated results that were on par, if not slightly better than our SD850 IS. Canon loaded this shooter up with some of its more advanced features (DIGIC 4 processor, optical image stabilization and face detection), and in most cases, you'd never be able to tell that you were shooting with a made-for-water camera. You can have a look at some sample shots we took below (which are completely unedited save for resizing) to judge for yourself, but all in all, we were quite pleased. Also of note, the video mode was perfectly suitable. If you've seen a video from one of the recent PowerShot SDxxx cameras, you've seen a video from the D10. The nice part here, however, is that you can get that quality of video while falling over rocks in an oversized inner tube. Dreamy, no?


That said, we do have our own list of gripes to share. Aside from the slight sluggishness at times, we had more than a few shots marred by fog, water droplets or other foreign matter on the crystal. We know it's impossible to coat this thing with a substance that prevents all buildup, but it's something you should definitely keep in mind. We tried to wipe the crystal clean with our fingertips whenever we could, and in most situations, that sufficed -- even if our fingers were wet. Also, shooting underwater proved quite challenging when outside of the pool. When trying to snap clear, bright images of fish while snorkeling, we had an exceptionally difficult time. We know that it'd be much easier if shooting just inches from the shore in the crystal clear waters of Bora Bora, but you should definitely lower your expectations when trying to snap stills in anything but the clearest, cleanest water. We were, however, satisfied with the underwater video performance (and the video performance in general). Have a look at the clip below to see how it fared underwater on a dark afternoon at sea.

All told, Canon's PowerShot D10 is a stellar adventure camera. It's more than just a waterproof camera that's only marginally larger than a standard P&S, it's a rugged, lightweight shooter that should suit most everyone but the professionals in attendance. For you all, there's always the $3,000 5D Mark II housing. Priced at around $300 on the streets, we'd say that you'd be hard pressed to find a better bargain considering just how flexible this is. If you've already got a DSLR for your serious shooting, there's no reason the D10 can't be your one and only point-and-shoot companion, regardless of whether you're in or out of the drink. And as for you argonauts -- well, you'd just need a darn good excuse to avoid this.