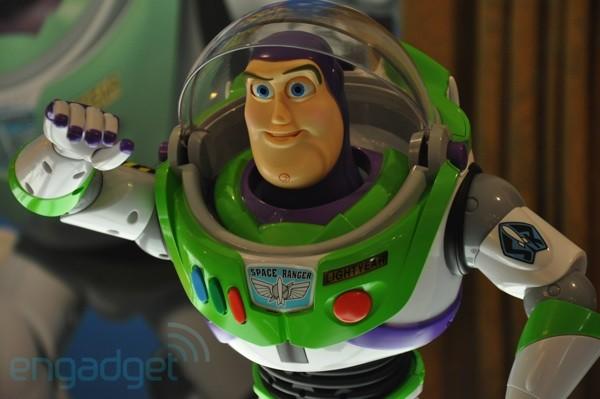 Step aside, Wall-E: Buzz Lightyear, courtesy of Thinkway Toys, has arrived to claim his rightful place at the top of the robot-based-on-Disney-character heap. Maybe that's a bit of a stretch, but Buzz's facial animation, sexy moves and trademark catch-phrases have all been wrapped up into a nice little bow here to rake in the cash when Toy Story and Toy Story 2 hit theaters this October as a 3D glasses double feature. Buzz responds to a few voice commands, can play a laser tag with the included remote, has a "Puppeteering Programming" mode to pose him for your own animations, and can even suffer an identity crisis when you tell him that he's just a toy. He'll be available this fall for $130-ish, check out a video after the break. In this article: buzz, buzz lightyear, BuzzLightyear, robot, robot toy, RobotToy, toy, toy story, toy story 2, ToyStory, ToyStory2
All products recommended by Engadget are selected by our editorial team, independent of our parent company. Some of our stories include affiliate links. If you buy something through one of these links, we may earn an affiliate commission.
Share
Tweet
Share