It goes without saying that we've been pretty excited about the Olympus E-P1 (or "digital Pen") since we first laid eyes on the prototype the company was showing off. The Micro Four Thirds camera just seems to breed gadget lust amongst the staff, combining the best of modern tech with a throwback retro style that is somewhat irresistible. Of course, no one wants to drop $800 on a digicam unless it's actually capable of taking a decent shot -- so we thought we'd put the E-P1 through some basic paces to see if this guy is worth unloading nearly a grand on. Read on for some of our first impressions and observations. 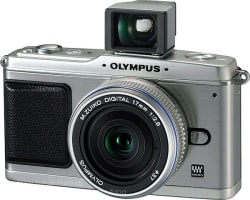 The hardware on the E-P1 is obviously gorgeous. At first glance, you can't help but be somewhat taken by the styling, which pays clear homage to Olympus cameras from the 60's and 70's -- in this case, the original "Pen" line of small, fixed lens and SLR models. The build quality doesn't disappoint either; the camera feels solid in your hands, though not so heavy or bulky that you couldn't throw it into a bag or shoot one-handed. In fact, we were pleasantly surprised with just how compact the device feels in your hands and when compared with an average DSLR.

The E-P1 has a large, 3-inch LCD display which was clear and crisp indoors, though we found it to be almost impossible to use in daylight. That wouldn't be an issue, except that the camera has no viewfinder, so under bright (or even overcast) light, you pretty much have to cross your fingers. This was kind of a big issue for us -- not being able to tell how an image will look in daylight is a bit of a downer when you're out shooting photos. Still, we found ways to compensate, but nothing that made up for a dedicated viewfinder.

Olympus does offer a $100 viewfinder attachment, though it's not going through the lens. It will help a bit in these situations, but doesn't really give you much wiggle room (or the accuracy you'd get with standard DSLR).

Thankfully, Olympus puts most of your go-to settings just a button press away, though the company does tuck away f-stop and shutter speed controls in menus accessible from the wheel on the back. We found getting into manual mode and flipping between settings to be relatively painless -- most of the functionality is obvious just by glancing at the back of the camera and controls up top.

The E-P1 was a cinch to set up and start snapping pictures with. We found the menu layout and navigation to be quite easy to figure out after a few quick guesses (though we have the advantage of constantly looking through the menus of new gadgets). Olympus is clearly aiming this model at the casual photographer set, offering lots and lots of preset modes that let you quickly get to snapping. We didn't need to use many of them, though the variations that we tried produced excellent results.

Those presets are a nice touch from the company, and will make this camera much easier to position to moms and dads that want to take nice family shots without a lot of fuss, or the amateur photographers who are looking for something easier and quick than their DSLR. More serious shooters will still have all the options they're looking for, but it's obvious that this is targeted elsewhere.
Still image quality

Our early impressions of the image quality from the E-P1 are mostly positive, though we do have a few issues with the camera that sap a tiny bit of our excitement.

Using the stock 14-42mm lens provided plenty of range for shooting, and we found the speed and accuracy of the autofocus to be rock solid (it wasn't quite D90 quality, but excellent nonetheless). As we mentioned before, indoors shooting was a snap, but going out-of-doors took a little adjusting. Once we got comfortable with the "hope for the best" angle of using the LCD, we ended up with some pretty decent shots. One big issue we had, however, was with color saturation and tint. We found much of the red and pink in our photos to be exaggerated in an unflattering way, with some reds even coming off as over exposed and nearly hot pink in hue. This doesn't feel like a dealbreaker (it obviously can be compensated for), but coming out of the box with noticeable color issues wasn't a plus in our book.


For low light / high ISO shooting, we came away pretty impressed with the noise levels we saw. The E-P1 has an ISO range of 100-6400. At the top end (and with a sensor this small) we expected more noise than we actually got. Compared with similarly sized point-and-shoot cameras, we thought this model did a brilliant job at tackling ISOs that would be unusable on some of the competition.

Overall, we're not about to pass final judgment on still quality -- we've only given the camera a short test, and we expect to see better (and more interesting) results once we've spent more time tweaking.


When it came to video, we were frankly blown away. The 720p output is nothing short of breathtaking, and we're looking forward to shooting some serious cop dramas with this thing. Unfortunately, we do have a bone to pick with Olympus on the audio -- the stereo sound is excellent, but while using continuous focus (a nice touch, and it looks great), the sound of the lens makes the experience somewhat less heartening. It's not unusable, but to have your gorgeous video marred by the shhhk / click of the lens is a bit annoying. That whole issue could easily be circumvented with an external audio input... but Olympus doesn't provide one here, meaning you're stuck with what's onboard.

We still have plenty more to explore on the E-P1, such as the in-camera editing, slideshow options, and lots of little perks that Olympus has smartly added, but at a glance, we're impressed with much of what the company has delivered.

Obviously some of the detracting factors here should give pause before you put down your $799 for the basic kit, but you should know that there are also a lot of really outstanding features and impressive performance packed into this small and extremely attractive package. The E-P1 would be an excellent pick for anyone getting serious about photography who wants something easy to use, but still powerful enough to take really striking pictures and video. And for the gadget lovers out there... well, let's just say our wallets might be getting about $800 lighter pretty soon.

If you want to read more on the E-P1, take a look at Gadling's informative multi-part review right here.