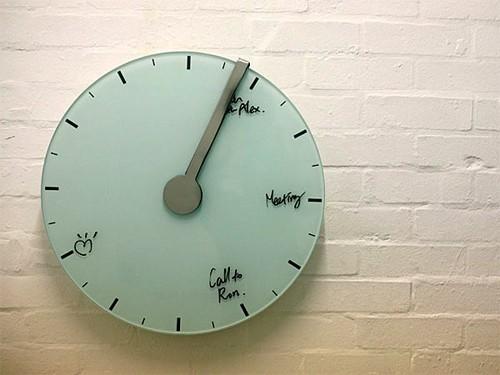 Pictured above is one of the most genius adaptations of the so-called "clock" that we've ever seen, and while the concept has been around for a tick, Il-Gu Cha's masterpiece is just now making its way around the expo circuit and showing itself off in a new video. Dubbed Trace of Time, this eraser-equipped timepiece is constructed primarily from glass and wipes away Dry Erase tasks as those deadlines slip away. Sure, the inability to hit the snooze on certain items could prove aggravating, but it's safe to say this is a bona fide procrastination killer at the very least. Peek the video just past the break.

In this article: awesome, clock, day planner, DayPlanner, dry erase, DryErase, Trace of Time, Trace of Time clock, TraceOfTime, TraceOfTimeClock
All products recommended by Engadget are selected by our editorial team, independent of our parent company. Some of our stories include affiliate links. If you buy something through one of these links, we may earn an affiliate commission.
Share
Tweet
Share