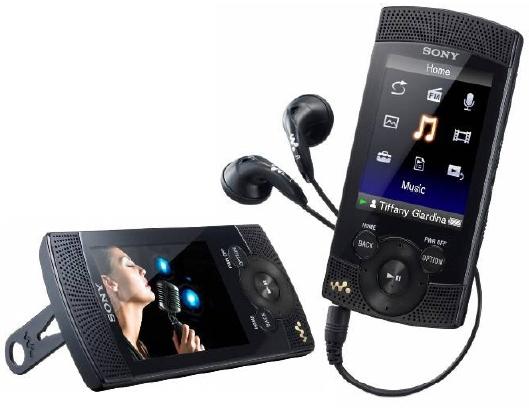 That Sony S-Series Walkman we spotted a couple of weeks ago has reared its speaker grill-laden head once more, only this time in what looks like an accidental unveiling on French retailer Materiel's website. According to the specs list -- accompanied by some new official press shots that give us little reason to doubt its validity -- the 8GB NWZ-S544 and 16GB NWZ-S545 feature a 2.4-inch QVGA widescreen display, stereo speakers, a microphone, FM tuner, a Li-ion battery for a reported 42 hours of audio / 6.5 hours of video, and what appears to be a built-in stand for convenient video watching. Codec support includes MP3, non-DRM AAC, WMA, H.254, MPEG4, and WMV. No fanciful colors like in the first pic, we've only got black listed for now, to the tune of 129€ ($182) for the 8GB model and 149€ ($211) for 16GB. We're still waiting on Sony to fess up to the device, but really, it can't get much more official. A price and release date for US would be nice, though.

In this article: nwz s544, nwz s545, nwz-s544, nwz-s545, NwzS544, NwzS545, portable audio, portable video, portableaudio, portablevideo, s series, s-series, sony, SSeries, walkman, walkman s-series, WalkmanS-series
All products recommended by Engadget are selected by our editorial team, independent of our parent company. Some of our stories include affiliate links. If you buy something through one of these links, we may earn an affiliate commission.
Share
Tweet
Share