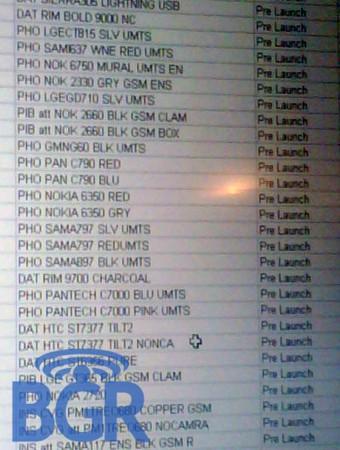 This "pre-launch" list of upcoming AT&T phones leaked out today, and it's pretty interesting -- in addition to the BlackBerry 9700, it also features the illusory Garmin-Asus nüvifone G60, which finally looks like it'll be coming to the US just a short 18 months after first being announced. Other notables include the HTC Tilt 2 and something called the HTC Pure, which Boy Genius Report says may be a variant of the Snap. No Android or webOS on this list, sadly, but hey -- the nüvifone is coming. Can you feel the excitement?
In this article: 9700, asus, att, blackberry, blackberry 9700, Blackberry9700, g60, garmin, garmin asus, garmin-asus, GarminAsus, htc, htc pure, htc snap, htc tilt 2, HtcPure, HtcSnap, HtcTilt2, leak, leaks, nuvifone, nuvifone g60, NuvifoneG60, pure, rim, snap, tilt, tilt 2, Tilt2
All products recommended by Engadget are selected by our editorial team, independent of our parent company. Some of our stories include affiliate links. If you buy something through one of these links, we may earn an affiliate commission.
Share
Tweet
Share