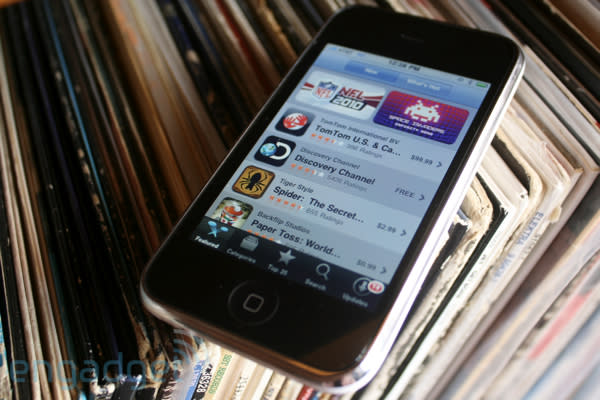 As Engadget's resident former attorney, my first instinct when I sat down to re-read Apple, AT&T's and Google's FCC filings regarding Google Voice was to put on my lawyer hat and try to find inconsistencies that might shed some additional light on what had actually happened -- if Apple's account differed from AT&T's, for example, perhaps those subtle differences would reveal the actual truth. This proved to be much more difficult than I had imagined, however: not only had Google redacted the most interesting part of its statement, I came to a profound realization after just a few moments of work.

Each of the responses was long, dense, and polished to a high-gloss shine that made each company's actions seem not only rational and justified, but almost inevitable in a way -- as I wrote at the time, Apple isn't exaggerating when it says that these are entirely new problems, and simply reading the individual letters paints a fairly sympathetic picture of how this whole chaotic process ended up in such disarray. But that's a perspective that assumes deeply-rooted interest in the systems and procedure of the App Store, a perspective that assumes there's a good reason we should be looking to lawyers and government regulators to figure out what's going on with the most exciting and vital software market that we've seen in a long time.


I don't think that's true. I don't think there's any good reason the most interesting things about the App Store right now should be procedural details and the number of submissions each reviewer handles a day -- somewhere around 80, if you can believe it. I'd rather be talking about new and exciting ways to integrate the iPhone and other mobile devices into my daily life -- I'd rather be talking about apps. And the more I think about it, the only way Apple can get back to that is by doing what it should have done in the first place: allowing developers and users to bypass the App Store and sideload apps onto the iPhone themselves.

Every single App Store submission story we've covered boils down to the fact that Apple is the single point of control for the iPhone ecosystem, and it's simply not fast or flexible enough to keep up with the rapid pace of innovation we're seeing on the platform. Like it or not, what's happening on the iPhone is leading the entire tech industry, and Apple should be doing everything in its power to enhance that, rather than miring itself in scandal and regulatory investigation. If that means releasing some control over the platform, then so be it -- especially since allowing sideloading would make almost all of these problems simply disappear.

I'm not arguing that Apple should do away with the App Store, or even that it should relax its restrictions and approval guidelines -- if anything, allowing apps to be manually installed would also allow Apple to tighten its control over the App Store, since developers would have an alternative method of distribution. Think about it: the overwhelming majority of consumers would still turn to the App Store and the App Store alone, creating a huge incentive for developers to meet Apple's inclusion guidelines, but the apps that push the boundaries would be able to find their own way into the hands of enthusiasts and early adopters -- and Apple would have an organic

base of innovation upon which to draw when it decides to tweak the rules or develop new features. Almost every other mobile platform allows sideloading in addition to having a centralized app store, and sooner or later Apple's tight grip on the platform will become a competitive disadvantage -- if it hasn't already.

Obviously there's a lot to be worked out with this plan -- allowing apps to be sideloaded immediately raises some major questions, like whether jailbreaking would be permitted, or whether developers could charge for non-App Store apps, or how to deal with apps like SlingPlayer Mobile that would apparently violate AT&T's terms of service -- but they're all solvable problems. I'd happily take a compromise that said sideloaded apps had to be free in order to preserve Apple's 30 percent App Store revenue stream, or one in which iTunes only installed apps developed using the official SDK -- those are far more constructive ways of advancing the iPhone as a platform than making procedural tweaks to the submission process or waiting for the next rev of HTML 5 to provide even richer web apps.

Maybe this is all just my personal filter talking -- Apple's description of an App Store Executive Review Board that handles novel problems and appeals immediately conjured up visions of lawyers and courtrooms for me -- but I get the feeling I'm not alone in this. I want to talk about technology, not paperwork; apps, not policy. I'm looking at these FCC papers and all I see is that Apple has the ability to put every App Store rejection story to bed forever, and all it's got to do is hand back a little control to its most passionate users. Let's hope someone in Cupertino sees that too.
In this article: app store, app store approval process, apple, AppStore, AppStoreApprovalProcess, att, column, columns, editorial, fcc, featured, features, google, google voice, GoogleVoice
All products recommended by Engadget are selected by our editorial team, independent of our parent company. Some of our stories include affiliate links. If you buy something through one of these links, we may earn an affiliate commission.
Share
Tweet
Share