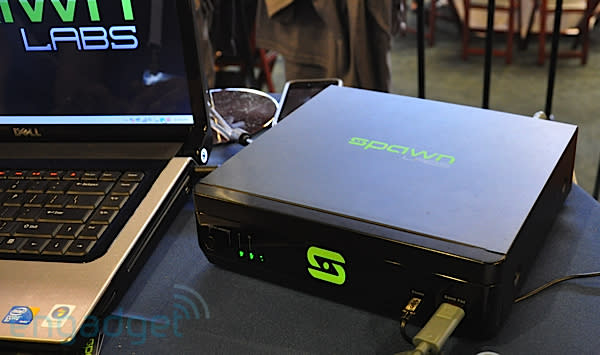 Sure, your heart may be aflutter with thoughts of gaming cloud services like OnLive and OTOY, but quietly making its debut this week is Spawn Labs with its "Bring Your Own console" HD-720 video game streamer, due out this November for $199.95. In a nutshell, the device works as a Slingbox for your Xbox 360, PlayStation 3, PS2, or GameCube and lets you play those consoles over the internet on your Windows PC (a Mac client is said to be in the works). The AV cables -- component or composite, no HDMI at this point -- are connected and can be then passed through to a TV as normal. A USB connection is used to sync up the controller, and there's also an IR signal for turning the connected system(s) on and off. On the computer, you can log the Spawn Labs website and play either your own system or jump onto one of your friends' systems for some faux-local co-op or to be a spectator.

We had a chance to take a look at the streamer and talk with some of the minds behind it at TechCrunch 50 to fill in some of the missing details. In a fairly controlled environment -- the device hooked up via ethernet to a private router on the show floor -- we were able to competently play Soul Calibur IV with what we were told was around 100ms audio / video and 5ms controller lag. Under ideal situations, it streams 720p / 30 frames per second in H.264 video with AAC-LC audio, but that can automatically downscale when the connection slows -- should we decide we're too lazy to make it from our bedroom to the couch to play Halo (an all too frequent scenario), it'll clearly work fine over a local network, but it's gonna be how well it works across that internet that's the real deal-breaker, and we weren't able to test that. Cross-continent play isn't recommended, but you can have spectators from all over the world and it won't at all affect your latency. Any PC controller can work and be custom-mapped, including just keyboard and mouse, although if you're wanting to use a PS3 pad you'll have to find the drivers for it yourself. The game window itself has buttons along the bottom for pulling up the system's specific guide menu or recording the video for upload to YouTube. What's impressive to us is that it's said to work with any computer that can handle a 720p video stream, and so far in the labs they've apparently got it working well on an ION-based netbook -- but we didn't get to see that for ourselves, so we'll hold applause until we can put it through its paces ourselves. See a video demonstration for yourself after the break.