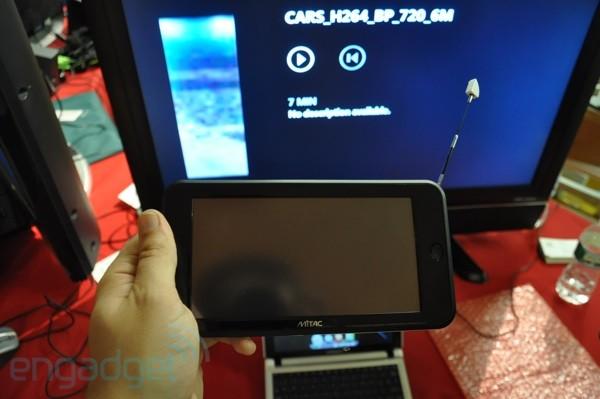 We've spotted an early prototype of an upcoming MID from Mitac powered by Tegra and running Windows CE, and we like where it's headed. There are actually a lot of similarities to Mobinnova's smartbook, though we suppose it's more of a Tegra thing: CE with a custom interface on top, emphasis on 720p media playback and output (there's an HDMI jack and TV tuner) and what promises to be an uber-competitive price and good battery life for the form factor. Mitac also plans on selling the thing with a fold-out case / keyboard combo to sweeten the deal. The unnamed device is quite thin, but unfortunately the unit we saw was out of battery -- though NVIDIA assured us it was "really cool" while it worked. Sure guys, sure.

In this article: features, hands-on, mid, mitac, nvidia, portable audio, portable video, portableaudio, portablevideo, tegra
All products recommended by Engadget are selected by our editorial team, independent of our parent company. Some of our stories include affiliate links. If you buy something through one of these links, we may earn an affiliate commission.
Share
Tweet
Share