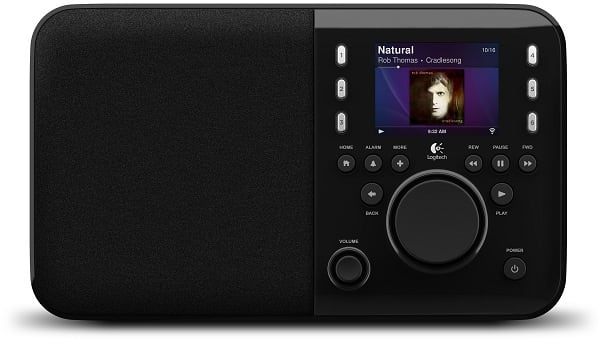 Everybody knows internet radio is a hit when you're at your computer. Away from your computer? Not so much. Getting your streams into your living rooms, bedrooms, and semi-detached servants quarters is rarely easy, and rarely fun. Logitech's Squeezebox series has been one of the most seamless ways to make it happen, and with the Squeezebox Radio it gets even better. It's cheaper and prettier than the Boom we enjoyed this time last year, and, a little more fun too. How much fun? Join in and see.

How would you rate the Squeezebox Radio?
We want to hear what you think. Post a quick review now to join the conversation!
Write a review


The Radio is a good bit smaller than the Boom, roughly two-thirds as wide. Think of this as a Boom with the right speaker lopped off, meaning yes, this is a mono device -- at least when not paired with headphones or something else connected to the 3.5mm output jack. That takes us to the second drawback: that's the only output. Audiophiles looking for a low-impedance way of getting their low-bitrate tunes to their high-end Goldmund setup should either order a Squeezebox Duet or wait for the upcoming Touch, which we will also be reviewing in due time.

The Radio is, as the name might suggest, intended to replace the average desktop radio; the sort of thing you might groove to in the kitchen or plunk down by the bed. It's particularly well-suited to that bedside task, shipping with a selection of sound effects built-in, including a number of white noise favorites like a light rain, a distant thunderstorm, and even a windy night. If only there were a fan noise it'd have all the standards covered. It sets its clock automatically when connected to the 'net, does a lovely job of gradually amping up the volume of whatever noise or stream selected to wake up to in the morning, and can be programmed to let you sleep in on weekends -- even if your week ends on Tuesday. The lack of a red clock display option means it's not the perfect alarm clock, but it's mighty close.

Like its predecessors, this thing isn't of much use without some internet love, either wired through the Ethernet port on the back or wireless through an 802.11g connection. Turn it on and it emits a lovely little piano riff, but unless there's a PMP of some sort connected to the 3.5mm input on the back, there will be no further tunes played here until a connection is achieved.

Entering in Wi-Fi security info through the scroll-wheel is a pain (you'll be regretting going for that 128-bit WEP key after about the fifth character), but once done it'll remember things internally and automatically connect quickly. From there a slew of streams are up for grabs. We were quickly able to find all of our favorites, even Brennan Underwood's Monkey Radio, the stream that introduced us to Kruder & Dorfmeister and the glory of acid jazz way back in the mid '90s.

Streams buffer quickly and track info is displayed on the tiny 2.4-inch LCD, a big improvement over the monochrome display of the Boom. This gives room for proper menus and graphics and easier navigation. This also makes room for a variety of apps, the most notable being Facebook integration. You can check for status updates, read your wall, and browse through photos. A Flickr app means photos from there, too, and while viewing them on a screen that's smaller than a credit card doesn't sound like much fun, it is a lovely bright thing, much higher quality than expected, with near 180-degree viewing angles and plenty of contrast.

Other notable apps include music delivery services Pandora, Last.fm, and Slacker Radio. Pandora in particular will make a number of users warm, with a simple interface that displays album art for whatever track is playing, will post the name of the current track to Facebook if you want to annoy friends, and even to jump from an artist in Pandora over to similar artists in Last.fm. Not enough? Flickr photos of the currently playing band can be browsed and, of course, party poopers can tell Pandora to never play that track again.

But what if you're a real party pooper and aren't into the whole social network, Web 2.0 thing? The device can stream downloaded files as well. Just install the Squeezebox Server software, which is open source and also available in installable flavors for Windows, Linux, and Mac OS X for those who don't feel like compiling it themselves. Once installed, it will serve up all your tunes, whether they be regular MP3s or purchases from iTunes.

And how will all those tunes sound? Just fine. Don't expect anything miraculous, but keep in mind this is intended as a bedside radio for casual listeners and you'll be fine with it. To be more specific, the sound is a bit hollow, delivering reasonable if somewhat boomy bass, good highs, and shallow mids -- and with no equalizer there's no tweaking to be done. But, again, we found the sound to be quite good in moderate-sized rooms, even if it is coming from half the speakers found on the Boom.

We tried to find something not to like about the Squeezebox Radio, but didn't have much success. We thought the bright screen would keep us awake at night, but it kindly turned itself off even as it kept the tunes pumping. We thought it'd forget to wake us up after we unplugged it and moved it to a new room, but sure enough our alarm settings were still there (5:44am, ouch), because they're stored online. About the only thing we can find as a serious fault is a 45 second start-up time, which is rather obnoxious if you just want to get some tunes rocking while you're chopping broccoli. The lack of a remote is a drag, too, as is having to pay extra for a battery pack. Oh, and it's impossible to keep clean. But, for a very fair $199 those seem like minor faults, all. We love this thing.
In this article: feature, featured, features, internet radio stream, InternetRadioStream, logitech, logitech squeezebox radio, LogitechSqueezeboxRadio, portable audio, portableaudio, radio, review, squeezebox, squeezebox radio, SqueezeboxRadio, streaming radio, StreamingRadio
All products recommended by Engadget are selected by our editorial team, independent of our parent company. Some of our stories include affiliate links. If you buy something through one of these links, we may earn an affiliate commission.
Share
Tweet
Share