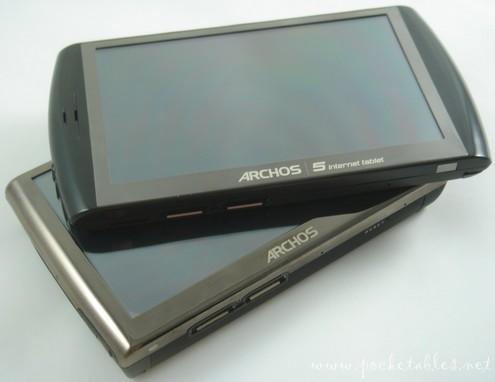 The folks at Pocketables have an Archos 5 Internet Media Tablet with Android in house, and after the requisite unboxing they've put it up against the older, wiser Archos 5 Internet Media Tablet original. It's not quite a fair fight, since the Android model shown here has 32GB of flash storage compared to the old IMT's 250GB HDD (there's also a HDD option for the new Android tablet, a whopping 500GB), but there are some other notable differences like materials and curves. Thankfully for Archos fans those differences don't break compatibility with the optional Archos 5 mini dock, and overall the Android model seems to have just a slight bit of "premium" vibe to it.
In this article: android, archos, archos 5, archos 5 internet media tablet, Archos5, Archos5InternetMediaTablet, in the wild, internet media tablet, internet media tablet with android, InternetMediaTablet, InternetMediaTabletWithAndroid, InTheWild, portable audio, portable video, portableaudio, portablevideo, unboxing
All products recommended by Engadget are selected by our editorial team, independent of our parent company. Some of our stories include affiliate links. If you buy something through one of these links, we may earn an affiliate commission.
Share
Tweet
Share