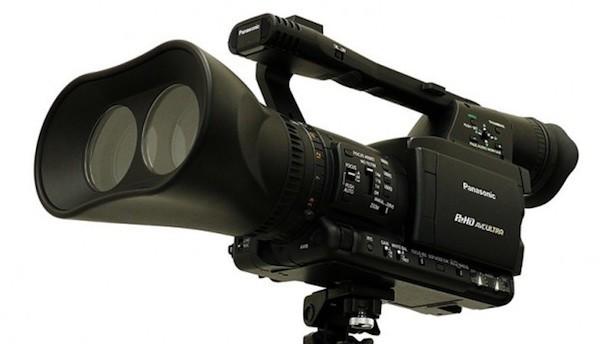 Now wait one second before you start on the whole "I'm not wearing any stupid looking glasses," because no matter what you say, there are more people paying extra to go 3D movies than ever and the reason is simple; it's because this isn't like the crappy 3D you saw during the Super Bowl last year -- or that our parents grew up with. No, the 3D that Sony, Panasonic, and others are promising next year is like nothing you've seen. We've come a long way since the old anaglyph red and blue glasses that come in cereal boxes, so before you knock the new technology before it's even out, click through and read about the technologies that might bring us a real 3D revolution.

We have two eyes for a reason and while we've enjoyed stereo sound since-like-forever, stereoscopic images haven't quite arrived. At its core, 3D is as simple as using two cameras to capture the data that our eyes would, but it's the display part that's proven tricky. Ultimately, the technology has to find a way to present each eye with a different variation of an image, at that point our eyes and brain do the rest.

The one thing that hasn't changed about 3D is the need for glasses -- if you're holding out for 3D on a big screen without glasses, you're going to let this generation of 3D pass you by. The technology in the glasses varies by a lot and the main two types these days are circular polarized and active LCD shutter. Both serve the same purpose, to ensure each eye sees a different image, but in much different ways.

Circular polarized glasses are easily the most common used in 3D cinema today. If you've been to a 3D presentation of a Pixar movie, or maybe to Disney World and used what look like cheap sunglasses, you've probably tried the technology. Without going into too much detail, each lens is set to filter out different light, so for example in a polarized system like RealD's, there can either be two projectors with different polarizing filters in front of each (pictured below) or a special ZScreen which can alternate the clockwise and counterclockwise polarization for each frame. In either case, the right and left frame alternate at about 144 times per second so that each of 24 frames per second of a movie is displayed 3 times per eye.

RealD circular polarized filter in front of a projector
One of the problems with circular polarized 3D is that a special silver screen is required and some argue it can negatively affect the color accuracy. But what's worse is that most of us don't have a projector at home and so far only a few HDTVs like the ridiculously expensive JVC GD-463D10 LCD TV at $9,200 can pull off the same polarization trickery.

So in comes the LCD shutter glasses -- the technology itself has actually been around for some time, in fact there were eight Sega Master Systems games that worked with shutter glasses dating back to the 80's. But the technology was limited by the display technology of that era which could only show 480i at 30 frames per second, which worked out to about 15 FPS per eye in 3D -- so yeah, the flickering could make you sick.

Sega Master System shutter glasses
Basically the way shutter glasses work is each lens can be blacked out very very quickly to synchronize with a frame displayed on the HDTV. This way a different 1920 x 1080 progressive image can be shown to each eye.

Notice that the LCD shutter on the left is closed.
An IR emitter connected to the TV sends signals to the glasses to keep 'em in sync. In larger demos, multiple emitters are mounted throughout the venue to ensure all the glasses get the signal. This is obviously less than ideal for a large movie theater, but shouldn't be a problem at home.

IR emitter used in Pansonic's 3D demo
The other reason shutter glasses make sense at home is because they don't limit the viewing angles of the display -- not to mention the glasses are more expensive and someone would likely steal them from a theater. But besides these advantages, proponents argue that the colors are more accurate, there's less ghosting and smearing, and it is argued that the contrast is greater between the left and right eyes. So, you add all these reasons together and the technology should provide the most realistic and reliable 3D technology ever unleashed on consumers -- at home or anywhere else.

It's not all good though, besides the cost of the glasses and the added emitter in the TV, some say that there is added flickering, and with the shutters closing in front of your eyes, the image is dimmed a bit. Both Sony and Panasonic claim these are no longer issues in thanks to the super fast refresh rates and brightness available on the latest HDTVs.

Yes, you read that right, all four of these tech giants are pushing the same home 3D display technology. While Samsung and Mitsubishi have been demoing its DLP HDTVs with shutter glasses for-like-ever, both Sony and Panasonic have been showing LCD and Plasma (respectively) HDTVs that can display 3D HD at CES, CEDIA and other shows. In fact Sony and Panasonic promise to release the first consumer 3D capable displays next year. That last part is an important one, so listen up: both will offer HDTVs next year that will work just like any other HDTV today, but will also work with 3D. So not only are the HDTVs going to be fully backwards compatible, but supposedly the new sets won't cost much more than a normal HDTV. In fact Panasonic believes that in the next few years most of its HDTVs will be 3D ready.

We know what you're thinking, you just bought a new HDTV and you want to know why it can't handle 3D. Even if it was possible to add an IR emitter to keep the shutter glasses in sync, the experience at 30 FPS per eye wouldn't be as enjoyable. And just like when the first 1080p HDTVs hit the shelves without the ability to actually accept 1080p input, the current crop of 120hz HDTVs can't actually display 120 frames per second -- only show each frame of a 60 fps signal, twice.

Of course, 3D-capable displays don't do much without 3D content, and the good news is that most of the infrastructure needed for 3D in the home is already here thanks to HD. With the new 1.4 spec, HDMI has been updated to accomdate 3D and the first source is almost guaranteed to be Blu-ray. In fact as we speak the BDA is working on standardizing the storage of 3D movies on a Blu-ray Disc. It actually isn't nearly as hard as it sounds, because what is essentially needed is to up the spec from 1080p at 30 FPS to 1080p at 120 FPS. In fact a 50GB Blu-ray Disc has more than ample capacity to handle a 3D HD movie thanks to the wonders of video compression where only the difference of each frame is stored. So 3D movies only require about 50 percent more space, and the one thing about the new 3D Blu-ray standard that has been determined, is that every 3D Blu-ray Disc will include a 2D version of the movie.

3D camera used to broadcast a College Football game on ESPN.
This part might surprise you, but there have already been 3D broadcasts of major sporting events. Using RealD's circular polarized technology, ESPN broadcasts 3D presentations of major sporting events to theaters around the country. The most recent was the USC vs Ohio State game on September 12th, but other events like the National Championship game last year, and the Olympics before it, were beamed to theaters in 3D. And let us tell you, if you haven't seen your favorite sport in 3D, you're really missing something. In fact we wouldn't be surprised if the real killer application for 3D in the home was sports. Sure movies will be the first to be delivered thanks to the slow evolution of broadcast technology, but we still have our hopes that ESPN 3D will be next. But while we wait for CableLabs and the SCTE to hammer out the details of a 3D delivery standard, satellite subscribers in the UK appear to be on track to get a 3D channel next year.

The other 3D content that is coming eventually is 3D gaming. Sony was showing 3D games at IFA this year and there have been a number of rumors that real 3D gaming is coming to the Xbox 360. The only thing we really know for sure at this point is that Avatar will be one of the first 3D games, although no word on what technology will be used.

But not everyone can see 3D

When we say that 3D isn't for everyone, we mean it. In fact it is estimated that 4 percent of us are actually physically incapable of seeing 3D no matter what the display technology. And even worse, according to the College of Optometrists in Vision Development, "Research has shown that up to 56 percent of those 18 to 38 years of age have one or more problems with binocular vision and therefore could have difficulty seeing 3D." So if you are one of these affected, it might be time to see an opthamologist and get screened for amblyopia. And if you happen to be blind in one eye you can still watch 3D, but it'll just look normal to you -- assuming of course you have the glasses on.

Where we go from here

One thing we weren't able to learn in our quest for 3D knowledge was how compatible these different technologies are. Essentially we assume that the functional compatibility between the two main 3D display technologies described above are like the differences between LCD and Plasma -- in other words, they both connect to the same HD set-top-box and Blu-ray player -- but until the BDA announces the final details of the 3D specification there isn't really any way to know for sure. But it seems that if Blu-ray was compatible with both circular polarized and LCD shutter glasses, then certainly whatever broadcast standard or game console announced down the road would also work with both.

Like it or not, 3D is coming and just like HD before it, there will be plenty of technology pundits predicting its demise. The problem right now is very few have had the chance to check out the technology and if you have been lucky enough to see it, it is hard to convey how cool it is to others. On top of this, 3D has a long road ahead because most people think they have seen it because they've tried the anaglyph glasses during a Super Bowl Commercial. The other big hurdle is the whole stupid looking glasses argument -- which doesn't make that much sense since you'll be wearing them in the privacy of your own home. Now we know that the same technology lovers who read Engadget would never hate on any new technology without experiencing it first hand, but tell your friends and family that something new is coming, and no it isn't like anything else they've seen.
In this article: 120hz, 3D, circular polarization, CircularPolarization, featured, features, Panasonic, Samsung, shutter glasses, ShutterGlasses, Sony
All products recommended by Engadget are selected by our editorial team, independent of our parent company. Some of our stories include affiliate links. If you buy something through one of these links, we may earn an affiliate commission.
Share
Tweet
Share