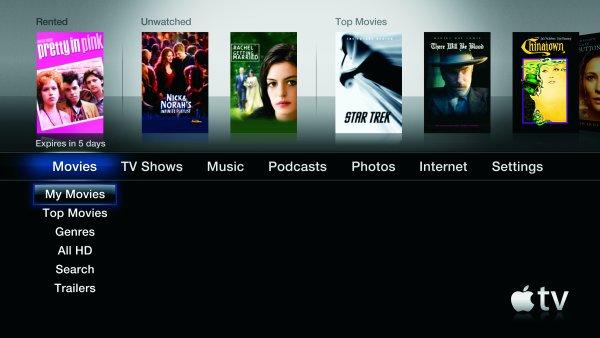 Looks like Apple's "hobby" is finally getting the iTunes Extra & LP features it was initially denied, as the Apple TV 3.0 software has just released, featuring a brand new main menu (above) plus Genius Mixes and internet radio access. It took a reboot and a few tries for units around here to start seeing the new software was available, so feel free to give that "check for updates" button a workout, 'til then the official PR is after the break describing what your box is missing.

CUPERTINO, California-October 29, 2009-Apple® today introduced new Apple TV® 3.0 software featuring a redesigned main menu that makes navigating your favorite content simpler and faster, and makes enjoying the largest selection of on-demand HD movie rentals and purchases, HD TV shows, music and podcasts from the iTunes® Store even better on your TV. You can now enjoy iTunes Extras and iTunes LP in stunning fullscreen with your Apple TV, as well as listen to Genius Mixes and Internet radio through your home theater system. The new Apple TV software is available immediately free of charge to existing Apple TV owners, and Apple TV with 160GB capacity is available for just $229.

"The new software for Apple TV features a simpler and faster interface that gives you instant access to your favorite content," said Eddy Cue, Apple's vice president of Internet Services. "HD movies and HD TV shows from iTunes have been a huge hit with Apple TV customers, and with Apple TV 3.0 they get great new features including iTunes Extras, Genius Mixes and Internet radio."

Now Apple TV users can enjoy Genius Mixes through their home theater system and listen to up to 12 endless mixes of songs that go great together, automatically generated from their iTunes library. Customers can also enjoy Internet radio, allowing them to browse and listen to thousands of Internet radio stations, as well as tag favorite stations to listen to later. Apple TV's support of HD photos is enhanced with iPhoto Events, which simplifies finding your favorite photos on Apple TV, as well as iPhoto® Faces, which gives access to photos organized by people identified in iPhoto.

Apple TV users have direct access to a catalog of over 8,000 Hollywood films on iTunes including over 2,000 in stunning HD video available for rent or purchase. Users can also choose from a selection of 11 million songs, 10,000 music videos and over 50,000 TV episodes to purchase directly from their Apple TV or browse and enjoy the iTunes Store podcast directory of over 175,000 free video and audio podcasts. Purchases downloaded to Apple TV are automatically synced back to iTunes on the user's computer for enjoyment on their Mac® or PC or all current generation iPods or iPhones.* iPod touch® or iPhone® users can download the free Remote app from the App Store to control their Apple TV with a simple tap or flick of the finger.

Pricing & Availability
The new Apple TV software is available as a free automatic download to all Apple TV customers. The 160GB Apple TV is available from the Apple Store® (www.apple.com), Apple's retail stores and Apple Authorized Resellers for a suggested retail price of $229 (US). Apple TV requires an 802.11b/g/n wireless network or 10/100 Base-T Ethernet networking, a broadband Internet connection and a high definition widescreen TV. Video availability varies by country.

Apple ignited the personal computer revolution in the 1970s with the Apple II and reinvented the personal computer in the 1980s with the Macintosh. Today, Apple continues to lead the industry in innovation with its award-winning computers, OS X operating system and iLife and professional applications. Apple is also spearheading the digital media revolution with its iPod portable music and video players and iTunes online store, and has entered the mobile phone market with its revolutionary iPhone.
In this article: 3.0, apple, apple tv, apple tv 3.0, AppleTv, AppleTv3.0, genius mixes, GeniusMixes, hdtv, itunes, itunes extras, itunes lp, ItunesExtras, ItunesLp, lp, software update, SoftwareUpdate
All products recommended by Engadget are selected by our editorial team, independent of our parent company. Some of our stories include affiliate links. If you buy something through one of these links, we may earn an affiliate commission.
Share
Tweet
Share