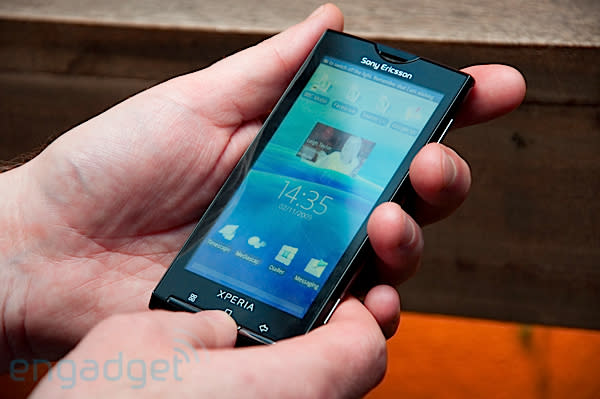 The first Android device from Sony Ericsson may have undergone an upgrade in the naming department, jumping from X3 all the way to XPERIA X10 (probably to avoid confusion with Nokia's X3 handset), but what lies under the hood is reassuringly in line with what we've been hearing. That is to say, a 1GHz Snapdragon chip from Qualcomm, wide 4-inch capacitive touch display, 8.1 megapixel camera with LED flash, and a thoroughly tricked out Android skin named Rachael. Sony Ericsson stressed to us the symbiotic importance of both the new flagship device and "open OS" UI -- the X10 was presented as the patriarch of a whole new family of handsets, which we can expect to see in the first half of 2010, all sporting the beauty of Rachael and perhaps helping to bridge the gap between featurephones and, well, more advanced featurephones. So don't be shy, come along past the break to see our uncensored first impressions of both, along with hands-on video and pictures.


We have to start off by noting that Sony Ericsson is calling its modified Android version the UX for now -- meaning User eXperience -- although we suspect it will revert to the more familiar Rachael naming scheme as soon as the lawyers have cleared a few hurdles and cashed a few checks. Part of a big "open OS" push by the company, this new interface will make appearances on a number of future handsets, both of the Android and Symbian persuasion, though Windows Mobile support sounded like something SE might consider only if there's much public demand for it (so much for a proper X2 successor, eh?). You'll find the full PR and exhaustive spec sheet in the gallery below.

There are three central modifications that Sony Ericsson has made to the default Android 1.6 installation, beyond the obvious visual overhaul. Taking the lead is Timescape, a spiritual sibling to the MOTOBLUR, which aggregates all of your communications on the phone, whether they be Tweets by your favorite NASA astronaut, missed and placed calls, received text messages, or Facebook status updates. It's all there, in one big gorgeous integrated pileup. Naturally, all that can be filtered by source or by person, making for a seamless environment for interacting with your friends over the otherwise quite fragmented social networking space. Mediascape does the same for the media on your phone, presenting what you have available locally or online, and making track suggestions on the basis of the song you're listening to or stuff it has discovered your friends like via their communications with you. Finally, there's face recognition, which automates photo tagging by recognizing your friends after the first time you tag them, and also allows you to call someone by simply tapping on their face when viewing a picture.


All this sounds very swish, and as you can glean from the video above, the prepackaged presentation was all strawberries, cream and smooth swiping, but we've already seen equally sharp and impressive videos leak online and what we really wanted to know was how the whole thing ran on a real device. Unfortunately, there was only a solitary X10 on show, and that bad boy had such an early build of the software that it really doesn't merit talking about. Calling the present interface "laggy" would be paying it an unearned compliment. We got the gist of what SE was trying to do here, but there's absolutely no way to evaluate whether the company has succeeded when usability was this low. With its Donut not even half baked, SE faces quite a challenge in trying to deliver its promised release in the first quarter of 2010, but there were a couple of fully cooked items that we can discuss.


The two apps that were already optimized, Google Maps and the WebKit-based default Android browser, showed us a happy glimpse of what the X10 is capable of. The 3G connection was lightning fast, and webpages were rendered quickly and accurately, with a satisfyingly smooth scrolling action that reminded us of Motorola's DROID. Similarly, Google Maps was responsive and relatively snappy, and showed off a little of what the Snapdragon under the hood can do.

Another thing that Snapdragon can do, apparently, is eat through your phone's battery. Again, we are dealing with a pre-production model here, but the number of power issues and the near-permanent attachment to the charger of the one device on show did not bode well for this phone's endurance. It sports the same 1,500mAh battery as the X2, so make of that what you will. Input duties are handled by the standard Android on-screen keyboard, and the minimalist trio of hard buttons do their jobs with relatively little fuss. We say jobs because the Options and Back keys change functions according to the context of what you are doing. Further testing would be required to tell if that's a boon or a hindrance. Multitouch capabilities like image rotation and zooming, which we expect to see as standard on touchscreen-dominated devices, are important and inexcusable omissions here.

The handset itself is pretty much what you might expect of a high end device -- it's full of appealing curves and slopes, which do nothing for usability (a physical keyboard might've helped), but give it a clean, uncomplicated, and relatively durable look. In our limited time handling it, we found the X10 comfortable enough, though you could tell you were holding a 4-inch device rather than something more compact like the original X1. Touring the outside reveals a MicroUSB charger / connector port, 8.1 megapixel camera, 3.5mm headphone jack, and an 8GB MicroSD card will be made part of the standard retail package.


There's not much we haven't noted already. If Sony Ericsson delivers its halcyonic vision of an ultra-integrated device that intuits your intentions and makes a highly connected life easier, we'll all be up in arms and rejoicing. Alas, the state of play today reveals a handset that has a phobia toward the untethered life and a software platform that is plagued by lag and unresponsiveness. We give kudos to SE for stepping outside of its featurephone comfort zone, and eagerly await the final results of this unquestionably ambitious project.
In this article: 3g, android, capacitive, capacitive touchscreen, CapacitiveTouchscreen, face recognition, FaceRecognition, feature, featured, features, hands on, hands-on, HandsOn, launch, mediascape, motoblur, pictures, qualcomm, rachael, snapdragon, sony, sony ericsson, SonyEricsson, symbian, timescape, touchscreen, user experience, UserExperience, ux, wifi, x10, x3, xperia, xperia x10, xperia x3, XperiaX10, XperiaX3
All products recommended by Engadget are selected by our editorial team, independent of our parent company. Some of our stories include affiliate links. If you buy something through one of these links, we may earn an affiliate commission.
Share
Tweet
Share