ASUS UL80Vt review: thin and light on a budget

L. Dziuban
November 11th, 2009
In this article: asus, asus ul80, asus ul80vt, AsusUl80, AsusUl80vt, culv, feature, featured, features, impressions, laptop, laptops, preview, review, reviews, ul80, ul80vt
With the release of Windows 7 has come a serious onslaught on new laptops. Great news for us, since we love choices -- but we don't really get a chance to take them all for a spin. ASUS's UL80Vt caught our eye for a few reasons. The company's increasingly attractive designs coupled with a really eye-catching price made it likely that this laptop (which is caught somewhere between a full-sizer and a netbook) could be on a lot of people's radars this holiday season. The 14-inch, CULV laptop boasts an Intel Core 2 Duo SU7300 CPU and, interestingly, switchable graphics. So, we decided to give this bad boy a try for ourselves -- so read on for our full impressions.
%Gallery-77887%
ASUS
0
SCORE
Engadget
N/A
Critics
6 reviews
83
Users
1 review
90 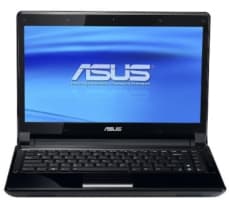 We're really fans of ASUS's recent Seashell design, so when we opened the box, we were heartened to see that it is carrying some of the elements we love over to this model. ASUS's dimpled trackpad and metal mousing button is all over its laptops these days, and it fits right in with the design of this laptop. Overall, the UL80Vt is an attractive package -- super glossy and fingerprint prone, to be sure -- but sleek and slim following the recent trend. It isn't the most rugged build quality we've ever seen, to be sure -- it's thin, light, and also easy enough to bend or warp in your hands if you give it a try -- but it also doesn't have any hallmarks we'd designate as cheap feeling. Essentially an update of the UL30A with a bit more screen real estate, and the welcome addition of an optical drive (plus a few performance-focused changes we'll hit on below), it's got a very solid feeling build, and the flush, chicklet style keyboard is really enjoyable to use -- especially with the nice, large palm rest.

Unfortunately, the mouse button isn't oriented or placed in a pleasing way, making the user experience pretty unenjoyable. The metal button is quite tight, and while it feels like it could loosen up a bit with repeated use, it's so stiff as it is that we were constantly having to press it several times to get one click to register. On top of that, it's recessed to the point of being nearly inaccessible to your fingertips, making for a rather annoying time. The trackpad, on the other hand, is pretty pleasing to use on its own -- just not in conjunction with that button. The multitouch gestures which ASUS has built into it are actually completely usable, with basic, programmable functions. The 14-inch, 16:9 screen is sufficiently bright and vibrant, but not overwhelmingly beautiful or clear.

Performance-wise, we're really very impressed with several tricks the UL80Vt has up its sleeve. This light laptop has switchable graphics (NVIDIA GeForce G210M and Intel GMA 4500MHD) allowing for toggling between discrete and power-saving integrated graphics, which automatically kicks in when the laptop isn't attached to a power supply. The discrete graphics can also be manually turned on and off with the button on the upper half of the keyboard, directly opposite from the power button. The UL80Vt is also packing a 1.3GHz Intel Core 2 Duo SU7300 CPU overclocked to 1.73GHz by default, another option which can be customized if you're not into that sort of thing. It also boasts 4GB of DDR3 RAM, and a 320GB hard drive. One thing which is nearly unmatched in our experience of similar laptops is battery performance -- this one is quite simply amazing. The slight amount of extra weight that comes with the 8-cell lithium ion battery will not be grudged by anyone when they realize that ASUS's 11.5-hour life estimate is seriously accurate -- and also possibly the first time we've ever out paced a battery's estimate when we got 12 hours, and 15 minutes out of this thing. In a world where most laptop battery life estimates are sheer jokery, this one, we were pleased to find, was dead on.

Other than than that, it's a pretty standard affair -- we didn't have any hiccups or major complaints, though the speakers aren't the greatest we've ever heard. For a thin and light, the UL80 seems meaty enough to us -- especially in this price range. Boot times are pretty quick, and we can't really see taxing this machine with standard use. Obviously, portability and a long battery life are the real draws here. It's got three USB ports and a multicard reader, plus VGA and HDMI outputs and an Ethernet port.

ASUS's ever-expanding lineup of reasonably priced laptops are also looking more sophisticated than your standard units, too, and their looks are pleasing to us. They seem to have found a nice sweet spot here at about $825 -- plus a $100 gift card if you buy from Amazon -- and while this CULV laptop's not going to be standing in for anyone's gaming rig any time soon, it's a real win for the thin and light category, where you expect certain tradeoffs. In this case, thankfully, battery life isn't one of them, and there are enough useful, pleasing features about this unit to outweigh the minor performance and hardware issues we found.
All products recommended by Engadget are selected by our editorial team, independent of our parent company. Some of our stories include affiliate links. If you buy something through one of these links, we may earn an affiliate commission.