In this article: chumby, chumby one, ChumbyOne, features, hands on, hands-on, HandsOn, review

Let's be honest: it's really hard to dislike Chumby. In fact, you feel almost compelled to root for any company bold enough to put out a product as unapologetically wacky as the original Chumby, a device that somehow managed to marry a soft, cuddly vinyl sphere with WiFi and a touchscreen. It didn't make a lot of sense, and as far as we can tell, the company didn't really intend it to -- they basically threw it out there and said, "hey, so we've got this... uh, thing... now let's see what you can do with it." It was an open platform, Chumby encouraged hackers to dig in and understand the guts, and over time, a small-but-vibrant community of users and developers emerged with several hundred widgets capable of doing everything from showing the time to cracking a few Chuck Norris jokes.

A quirky, overpriced alarm clock without broad market appeal can only take you so far, though -- someone's eventually got to pay the bills. Enter the $100 Chumby One, Chumby's first attempt to grow up and produce an affordable device that loses a little bit of the Chumby Classic's insanity while carefully staying true to the company's roots. Will this be Chumby's ticket out of the geek niche and into mainstream living rooms and offices? 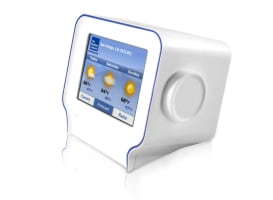 After playing with the One for a couple hours, our answer is a whimsical "why not?" Let's be very clear -- no one needs the Chumby One, nor does it close any great gap in your tech life -- but it offers enough information and functionality in one small, portable, cordless place to justify the modest price of admission.

Yes, that's right, we said "cordless." The One makes good on perhaps the Classic's most damning shortcoming -- an inability to escape the wall outlet -- by including a space for a rechargeable battery underneath the base. It's not included with the device, but a quick Google check suggests that they can be readily obtained for $10 to $20. Our quick testing leads us to believe that you'd maybe get an hour and a half to two hours off of a charge (better than Chumby's quoted one hour); it's not like you'll want to be away from the charger for weeks on end, but it's good if you normally use it as your alarm clock and want to move it to another room to use as a table radio for a little while, for example.

For hardware, the Chumby One is in many ways a simplified Classic, starting with a complete and utter lack of stuffing (that's a good thing for mainstream users, we'd argue). Besides the battery cover, the base has a black antenna used for FM radio reception; we never bothered to even unfurl it and we were still able to pull in a variety of local programming in crystal clarity. Around back, you've got a 3.5mm headphone jack, power port, on / off button, loudspeaker, and just one USB port, down from two on the Classic -- you won't miss the second, unless you need wired Ethernet and iPod connectivity at the same time. On the right side, you'll find a welcome addition -- a dedicated volume knob, which means you don't need to hop into the control panel anymore and actuate the on-screen slider if the music gets too loud. The top has a Chumby logo button that's used to trigger the control panel; it replaces the Classic's so-called "squeeze sensor" and can be pressed while tilting the One left or right to "slide in" the previous or next widget. Gimmicky, but cool.

Front and center lies the 3.5-inch touchscreen, the same size you find on the older model; that surprised us a bit because the One is quite a bit smaller in person than we'd expected it to be and seems smaller than the Classic, but then again, there's no plush goodness here to plump up the surrounds. The display is plenty sensitive, which is good because you'll need to interact directly with the screen to accomplish just about anything. If we had a complaint here, it'd be that the screen isn't flush with the surrounding bezel which can making touching the extreme edges and corners a challenge, but we didn't find it to be a big deal.

The simple interface is a dead ringer for the Classic; nothing has changed here, and that's just fine by us. In normal operation, your default "channel" -- Chumby's terminology for a particular set of selected widgets -- cycles on an endless loop, and if you'd like to add widgets or channels, you log into Chumby's site to do so (though you can delete widgets and freeze the display right from the device itself if you need to). By entering the control panel, you'll find a night mode that offers a super-dim clock and alarm display for bedside duty, though we wish this mode could be triggered automatically by light sensor (very early Classics had sensors, but for whatever reason, they were later removed). This is also where you'll go to set alarms and play music through any of the impressive variety of services that Chumby supports, including Pandora, SHOUTcast, Squeezebox Server (if you have one on your network), and a handful of podcast services and miscellaneous providers plus iPod, mass storage, and the aforementioned FM radio support. It all works well, and we like the fact that each source has its own customized UI that looks custom-suited to the service it's for (the iPod player, for example, apes iTunes). Once you've started playing your music of choice, you can navigate away and return to your widget channel if you like. We found that the built-in loudspeaker is plenty loud and clear for basic desk duty, and you always have that headphone jack available to you if you're looking for higher fidelity.

Unlike the Chumby Classic -- which has cost anywhere between $200 and $600 over the past couple years depending on color and cover design -- the Chumby One at $100 is cheap enough so that you can effectively buy it without having any idea what you'll use it for and still not suffer even a fleeting second of buyer's remorse. Out of the box, it's a passable streaming media player, an FM radio, a photo frame, an alarm clock, a weather station, a news ticker, and more; all told, you've got over a thousand widgets available online, and with enough elbow grease, Chumby gives you the tools to make it whatever you want it to be. A miniature do-anything box for a Benjamin that doesn't look like it belongs in your toddler's toy chest? Sounds like a steal to us.