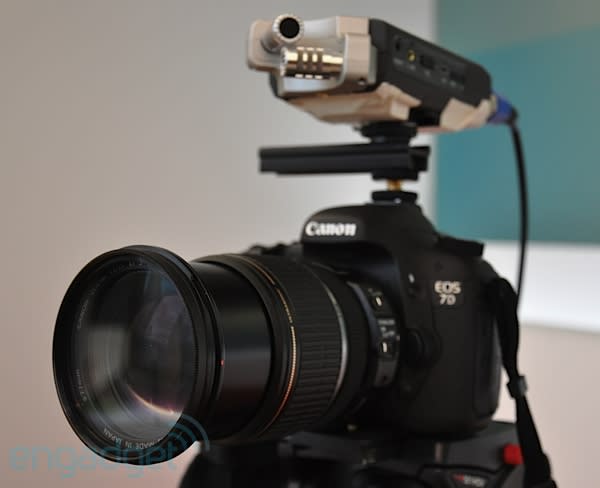 Chad Mumm is our video producer at Engadget, doing work on The Engadget Show and filming shorter-form stuff when we need it. He recently acquired the 7D for personal and work use, and we asked him to put together some thoughts on the camera in terms of using it primarily for video. You can check out our traditional review roundup for the 7D here.
These times are strange. Five years ago if you walked onto the set of a movie, TV show, or music video -- before you got kicked out by a strung out production assistant -- you'd have probably seen a bustling group of workers huddled around a giant camera changing out huge spools with Kodak or Fujifilm logos on them. The RED ONE camera shook up the industry when it was released two years ago and those cans of film were replaced with hard-drives and digital technicians. Now, we're in the midst of another monumental camera shift, and it's not the 3D revolution that everyone predicted. Nope, in 2009 we make our movies on DSLRs. Just how good are they? Well, the recently released Canon EOS 7D may just be the new Engadget workhorse. Read on for the inside scoop on our ridiculously cinematic new rig. A little more than a year ago Canon dropped the EOS 5D Mark II, which recorded real 1080p video using its 35mm, full-frame sensor. One of the advantages of big sensors is much greater control of depth-of-field, and the 5D enabled anybody with a few thousand dollars to burn to approximate the look of 70mm movie film straight out of the box. Indie filmmakers everywhere began posting gloriously blurry test films of their friends on Vimeo and industry pros took notice. Now, Canon's newest HDSLR offering, the EOS 7d, takes the concept and runs with it, in surprising and sometimes frustrating ways.

You can buy a new 7D (body only) for $1800. That's more than $1000 less than the 5D. We shilled out around three grand for ours with some quality glass (the EOS EF-s 17-55mm f2.8 lens, in case you were wondering). Besides a smaller form-factor than the 5D Mark II, the 7d has a new control layout that makes video shooting quicker and easier, including a dedicated movie-mode switch and a recording start/stop button. Like you'd expect from a high-end device, the build quality is excellent and the camera feels solid in your hand. The LCD is crisp and bright and the camera adds a few new features like a pitch and roll level meter and a nineteen point autofocus.

The 7D has an APS-C cropped frame sensor, which is actually closer to Super 35mm movie film and/or RED's sensor than the full-frame of the 5D Mark II. This means that you can't get quite the same level of shallow depth of field as the 5D, but trust us, you won't have any problem getting backgrounds to go all creamy, especially with some fast glass in front of the camera. One thing to note, full-frame 35mm lenses will have a crop factor of 1.6 on the 7d. This is true of all cropped-frame cameras and it results in that 18mm wide angle lens behaving like a 30mm lens (take your 35mm lens length and multiply it by 1.6 for its equivalent cropped-frame length).

One of the biggest drawbacks of the 5D Mark II was its 30 frames per second video framerate. Movies are shot at 24 frames per second and those six frames make a huge difference in terms of the film-ness of a piece of video footage. With the 7D, Canon is offering a choice of multiple framerates for video recording for the first time. You can now record at 23.98 fps, 29.97 fps, or 59.98 fps. The 59.98 recording mode downscales the video to 720p, but it's great for an "overcranked" slow-motion effect when conformed back to 23.98 on your computer. Get ready for a rash of Wes Anderson-style, slo-mo montages of people entering and exiting cars and buildings. Of course, all this flexibility is par for the course in modern broadcast cameras, but it seems that Canon is learning as it goes instead of simply looking at the requirements of professional video shooters. Case in point, after 5D Mark II adopters cried foul, Canon announced a firmware update to bring these additional framerates to the 5D sometime next year, which begs the obvious question of why they weren't included in the first place?

Another troubling omission on Canon's part is the audio recording capabilities on the 7D. Aside from the limitations of a small onboard microphone and a 1/8-inch microphone input, the camera has automatic gain control (AGC), which adjusts the volume of the audio signal inside the camera. The problem? It's impossible to disable. If the point of an SLR is to give the user full control over the tiniest details of their camera setup, then there is absolutely no reason why this crucial function should be left to the camera's discretion. Great video quality is nothing without great audio and in the production world, omitting manual controls for audio is akin to creating an SLR that won't let you manually adjust the iris. It's that bad. "Sure," you'll say, "the 7D is above-all a stills camera ," but if Canon went to the trouble of giving its video users the framerates they've been asking for, why not correct the audio recording issue? The 5D had the exact same problem and it's been talked about (and hacked to work better) since the camera first hit the streets.

Fortunately for the 7D, the footage just looks too damn good to not find a workaround. Enter the Zoom H4N. This $300, battery-powered audio recorder can record four independent channels of 24-bit audio to an SD card, including a two-channel stereo mix from its built in dual-microphone. Two 48v phantom-powered XLR inputs gives you professional connectivity for your lavelier or shotgun mics and the headphone output allows you to send the mixed signal back to the 7D as a reference to be recorded along with the video. When you get the project into your editing computer, just import the externally recorded audio, sync it up with your reference audio and enjoy the pristine sound you could never get with the 16-bit recording on your $5,500 Panasonic HVX-200 or your $8,320 Sony EX-3.

We put together some videos demonstrating the camera rig, both with and without the Zoom recorder. Take a look.

Oh, and in case you were wondering, the 7D does stills too. At 18 megapixels, it has plenty of resolution for cropping your pictures into oblivion, and the 19-point autofocus is a big step-up from the previous generations. The camera can burn through 8 shots every second, which, when coupled with the cropped-frame sensor makes the 7D perfect for shooting action stills.

From our initial experience using the camera, we found it very easy to go from shooting stills to shooting glorious 1080p movies. Even during dedicated photo shooting, it's hard not to be inspired to flip the switch and roll some 24p video. We also found ourselves using the live-view mode to eyeball exposure for stills much more than we had on previous live-view enabled cameras; perhaps this was a carryover from all the video shooting.

One of the major downsides to the 7D is the 12 minute recording limit for video. That's not a lot of time, especially if you're interviewing somebody on camera and you don't want to break up the flow with constant stopping and starting. This is actually a limitation of the FAT32 formatting of the flash memory that even plagues P2 cameras like the Panasonic HVX-200, although the HVX gets around this problem by automatically creating a new clip at the 12 minute mark and combining them together when the recording is stopped. That said, we noticed the camera getting very warm (dare we say hot?) during recording durations longer than 4-5 minutes in an air-conditioned room, and we're a little worried about how hot the camera would get outside in the sun on a hot summer day during longer recording. With all that processing in such a small body, the heat isn't exactly surprising -- we've known the RED ONE camera to get extremely hot during long takes -- but it is something to keep an eye on.

Lastly, it's almost impossible to use the camera for "run and gun," documentary-style shooting without some sort of after-market stabilizing device, like a shoulder-mount or brace. The camera is just too difficult to balance, especially when you add accessories and big lenses, plus you have to be constantly adjusting focus. It's a good way to wear out your arms. That said, try using a RED ONE (or any cinema camera, for that matter) without a shoulder-mount -- it's not gonna happen. These devices are built for imaging and there will always be a tradeoff with ergonomics.

So, is this our new video camera? We like to think of the 7D as another very specific tool in our arsenal. Will we be shooting segments for The Engadget Show on it? Yes, but there is a time and a place for this camera. If we're running around shooting a mile-a-minute, we're still going to reach for our trusty HD camcorder. But if we have a moment to breathe in between takes, you can bet the 7D will be the go-to camera. It's easy to get caught up in the beautiful images from this camera, but like with all recording, it's merely a tool to help tell a story.
In this article: 7d, canon, canon eos 7d, CanonEos7d, features, impressions, preview
All products recommended by Engadget are selected by our editorial team, independent of our parent company. Some of our stories include affiliate links. If you buy something through one of these links, we may earn an affiliate commission.
Share
Tweet
Share