We've been playing with the Altec Lansing inMotion Classic iMT620 for a few days now, and before you think "man, not another iPhone stereo dock," look again. It was (mostly) love at first sight when we spotted this mini boombox -- sharp corners and minimalism are what Altec Lansing does best these days, and the hint of retro isn't hurting anyone, either. Like the iMT620's predecessors, the inMotion series still bears the portability hallmark in the form of a built-in battery (up to five hours for this model), and now with the addition of a multifunctional handle as well. But is it really worth the $149 tag? Read on to find out. 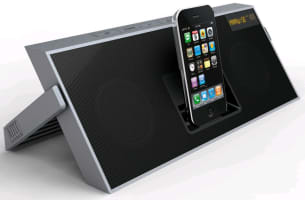 Since the iMT620 is sold as an iPhone stereo, one of the first things we tested was the phone-interference shielding, and we weren't disappointed. The well-shielded entirety of the device meant we could enjoy respectable audio quality without any interruption from spontaneous bleeps and bloops. For us the speaker was great with mid-range and treble, bringing the sweet guitar-plucking action in Hotel California right in front of us. The bass was just right for pop music in your bedroom -- pretty good for a speaker of this form factor, but R&B and heavy metal fans may want to consider something more heavy duty like the Mix iMT800. Crank the volume up from the usual 16 to a maximum of 40 and you'll have music for a small house party, but the lack of strong bass becomes more apparent with slight bass distortion above 35.

Later on we noticed an annoying bug: regardless of the previous volume setting, sometimes upon bootup the iMT620 automatically bumped the volume up to level 19 for no reason. Another problem (albeit a less severe one) was that there were times when song information didn't get updated on the LCD screen, which you will see in the video to come. Hopefully these problems are just limited to our setup, but hey, it's worth a mention.

From afar the iMT620 appears to be encased in an anodized aluminum bezel, but in fact it's just a semi-gloss metallic silver finish applied on plastic. While this saves you from the cold, harsh touch of metal, we couldn't help but to think this was just Altec Lansing opting for the cheaper material (and still charging a fairly large amount). We like the subtle marks on the top buttons -- quite a radical but nice change from the ugly, faux LCD buttons on the inMotion MAX and GLOW. On the top right corner of the speaker you'll find an LCD which shows the mode you're in, battery level, song information and FM radio frequency. Turn the speaker around and you'll find an audio-in port, power socket, slide-in remote control dock and telescopic radio antenna. As for the universal iPod dock, you can garnish it with a choice of two adapters: one for the iPhone 3G / 3GS, and another for the iPod nano 4G / 5G; owners of other iPod models will just have to be careful not to knock over the player. Similarly, the iMT620 is kitted with several socket adapters (US, UK, Europe and China / Australia) to cater to travelers.

As mentioned earlier, one of the highlights of this stereo is the handle which also serves as a stand and a power-off switch while folded during battery mode (i.e. the device doesn't turn on by accident when the bar is down). The bar alone has little we can fault -- it locks well in the three hinged positions, has good grip and as a handle supports the 4 pound body with little flex, but we did notice its loose rubber feet which could do with some stronger glue. Leaving that minor issue behind, we then had a go on the full-featured IR remote, which has plenty to offer -- not only do you get the usual playback control functionality, but there are also dedicated keys for accessing the iPod menus and playlists, as well as toggling shuffle and repeat. You can also program the four preset keys for your four favorite radio channels: simply hold down one of the 'P' keys for a few seconds to store the current channel. The only problem we had with the remote was our iPhone's delayed response to us pressing the 'Menu' button, but strangely the other iPod keys had no problem, and we weren't sure whether it was the phone or the speaker to be blamed. We doubt many would use the remote to access the iPod menus anyway since it's quite a challenge to read the text from a distance, and we'll let you decide if the said delay in this video is enough to deter you from buying the speaker:

The inMotion Classic iMT620 may have a few bugs, but they shouldn't get in the way for most users. As a portable speaker the five-hour battery should be plenty for a day-out, and it can definitely emit plenty of volume for outdoor usage, but it's a bit annoying that you can't casually use the handle with the iPod device docked. As a static speaker it produces great audio as well (given the size, of course), but for $149 we'd like to see an alarm clock function on it as well considering cheaper models have one -- though, we will say that few can pump out the jams when away from the wall outlet. We'd definitely recommend this to anyone looking for a solid battery-powered iPhone speaker, but just keep an eye out for a good discount.