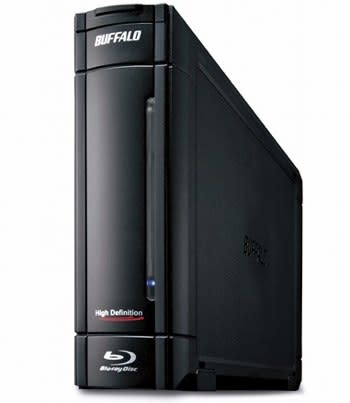 Sure, your computer doesn't have a USB 3.0 plug, and there's no such thing as a 12x Blu-ray disc for mass consumption just yet, but we shouldn't let those pesky details get in the way of progress. Buffalo just announced the BR-X1216U3, which is the "world's first" (er, not exactly, but anyways...) 12x Blu-ray burner, and which incidentally pulls off its wondrous feats through the power of USB 3.0. Of course, it's backward compatible with USB 2.0, for burn speeds up to 7x, but with 12x on the table that's just slumming it. The drive is out now in Japan for 39,100 yen (about $448 US).
In this article: 12x blu-ray, 12xBlu-ray, blu-ray, blu-ray burner, Blu-rayBurner, buffalo, burner, usb 3, usb 3.0, Usb3, Usb3.0
All products recommended by Engadget are selected by our editorial team, independent of our parent company. Some of our stories include affiliate links. If you buy something through one of these links, we may earn an affiliate commission.
Share
Tweet
Share